I received an email from a gentleman who is a motor home owner and tows a car trailer that wanted a bit of help. Here’s what I received:

Dear Caravan Chronicles
I hope you can help. I have a motorhome which I use to pull a car trailer to classic car racing events. My trailer currently has a Warn winch to help load and unload my sports car but I have recently had a caravan motor mover fitted to help with manoeuvring the trailer with the car loaded. The trailer has one 110Ah battery fitted for the winch, which I have to charge by plugging in the trailer to a mains socket in the motorhome. I asked the company installing the mover if they could install a second 110 Ah battery for the mover and make it so I could charge both batteries while towing. Unfortunately they said it could not be done. I also asked if they could make it so I could link the two batteries if required with a switch, which they also said couldn’t be done. They did advise me to talk to the people that fitted the tow bar. To cut a long story short they also said what I wanted could not be done. Can you come up with something that would work?
Many thanks XXXXXXXX

After a couple of email exchanges to confirm a few things, here’s what I came up with: 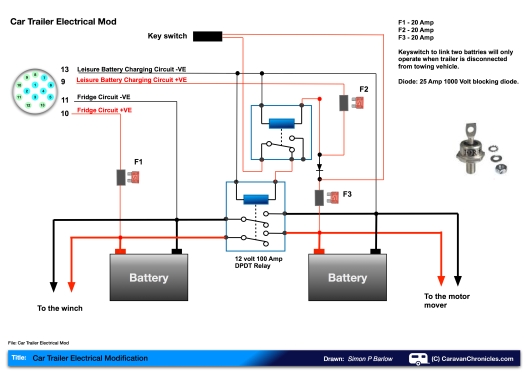 Using the Leisure battery charging circuit to charge the 110Ah motor mover battery and the Fridge circuit to charge the winch battery was a simple task. However, to link the two batteries and make it so they could not be linked while connected to the tow vehicle so as not to cause any issues with equipment installed in the motor home took at least one cup of coffee’s thinking.

When the batteries are linked (it’s incase one or the other is flat so that either mover or winch can be used) there would be a potential for a large current to be drawn… around 80 amps for either the winch or mover so I sourced a 100 Amp DPDT (Double Pole Double Throw) relay. To stop this relay being operated a second 30 Amp relay was used that when the leisure battery charging circuit was live – i.e. plugged into the motor home, it would be impossible for the main relay to operate. A second level of safety was also added in the form of a key switch. Only the person with a key can actually link the batteries and the key would be on the motor home ignition key ring so the engine of the motor home would have to be off and therefore even if the trailer was still connected to the motor home the fridge circuit would be isolated.

Electrical protection would be via three fuses. If any fuse failed the circuit would ‘fail safe’. If F3 failed (protecting the relays) it would be impossible to link the two batteries. The key switch was one that you could only remove the key on the ‘off’ position to stop the batteries being linked, removing the key and starting the engine of the motor home.

The gentleman gave the drawing to his local tow bar auto electrician who upgraded the motor home towing electrics from a 12N to a 13 Pin socket and installed all the wiring on the trailer. He had it all installed and working within a day. The heavy-duty wiring to the winch and motor mover was completed in 16mm cable and the rest was in 2.5mm cable. Additionally, two C-TEK chargers were installed one for each battery so that the trailer could be left plugged in over winter to keep the batteries in good condition. The trailer has been used on five trips and has worked perfectly I have been informed.

It’s a bit of an unusual one and not generally something you would come across, but it might be of use to some of the motor home owners that tow cars on trailers that read Caravan Chronicles.