No, not promoting me but for the 2020 Caravan & Motorhome Show at Event City next to the Trafford Centre in Manchester. It’s the first show of the year and features all the main caravan dealers in the North West.

It starts on Thursday 16th January and runs through to Sunday 19th. Since it’s move from the city centre the show has seen a constant year on year growth attracting more and more visitors and a wider number of exhibitors. It’s also become the first place you can not only see some of the caravan & motorhome manufacturers mid life updates to the 2020 range launched last year but you have the opportunity to be in early to buy one ready for this years season.

You really get great value as at the same time you can visit Destinations: The Holiday & Travel Show. With travel companies such as Trailfinders, Ramblers Worldwide, Viking Cruises and Royal Caribbean, as well as tourist boards including Thailand, Malta, Taiwan, India and more, you are sure to find something to suit your travel interests.

You can get book your tickets HERE

A great day out at a great show…

OK, so I’m biased… it’s my ‘home’ show being from Manchester. However where else could you go and visit a caravan show, do some shopping in one of the UK’s biggest shopping malls, dine out in the Orient and then see a movie all without having to use your car!

I’ll be there on opening day so come and say “Hi” if you see me and I suspect some of the “Northern Posse” of Bloggers and Vloggers will be there also. Honestly it’s a great show and a great way to start off the 2020 Season!

As Christmas draws ever closer, both Sue and I would like to wish you all a Merry Christmas… or Happy Holiday….. or Happy Hanukkah, or what ever festival you celebrate this time of year.

Whether you are away in your caravan or motorhome celebrating the season or at home planning family memories to be made next year we both wish you safe travels.

We will next be out and about for the Caravan & Motorhome Show 2020 at Event City. I will be there on Thursday 16th January for the opening – hopefully with Sue too, and the show is on through to Sunday 19th January 2020. Don’t be shy and say “Hello”…. it doesn’t have to be an Andrew Ditton “Hellooo”…. honest.

The 2015 Caravan and Motorhome show was held once again at Event City near the Trafford Centre shopping mall. Although in its 17th year, this is the fourth year its been held at Event City and 2014 saw a record-breaking attendance of over 27,900 visitors, up by 13% on 2012.  if the success continues at the current rate it won’t be long before it might have to go from a 4 day event to a 5 day event.

Although the weather was forecast to be a bit wild and windy, the sun was shining and the M60 motorway was surprisingly quiet as we left home this morning and it only took about 20 minutes to get there. Car parking is not a problem and this year they have introduced a temporary traffic light crossing on Barton Dock road to make it easier crossing from the car park to Event City. 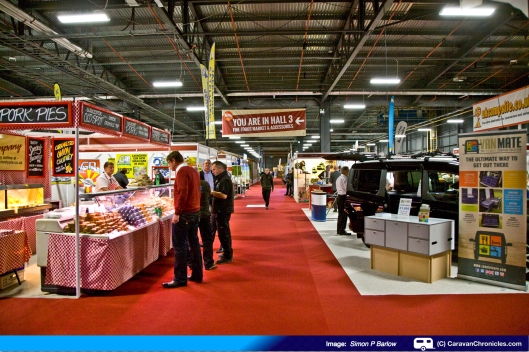 Thankfully we had a chance to gain access before the show opened to the public which gave us chance to check out some of the stands before they got too busy.

One of the new exhibitors to the Manchester show this year was Airstream and they had one of their iconic Airstream travel trailers along with TAB and the largest gathering of Eriba caravans we had seen. 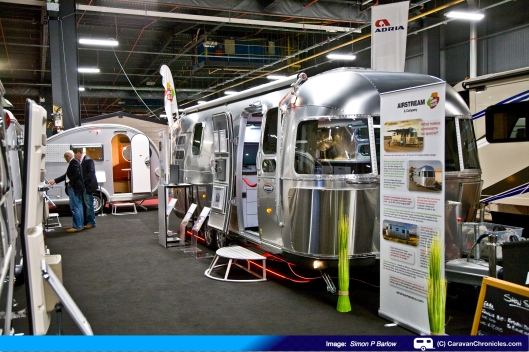 Although you do see a lot of Eriba caravans on sites, it’s not often you can get to look round and for such a tiny caravan on the outside, really there is a bit of a space time thing going on as I’m sure they are bigger on the inside!

Glossop Caravans are one of the biggest caravan and motorhome retailers in the country and this show is almost in their back yard and they make the effort to make sure that they cover as many of the models as possible.

Sue’s favourite caravan of the show… I thought I was going to have to go and do a deal with Brian Lang before she would come out!

Between Glossop’s stand and Swift’s stand I think every option for Swift Group products was covered.

The other major caravan dealers in the north-west Lowdhams, Campbells and Kimberly covered the other manufacturers. It was noticeable though the tiny number of Bailey caravans on show although Lowdhams had a great selection of Bailey motor-homes on their stand.

The show opened it’s doors promptly at 10:00 and the massed gathering outside in the entrance foyer flooded in. You could tell it was going to be busy.

By now it was coffee and bacon and egg muffin time….. DISASTER! Non of the food retailers we checked out had a traditional show breakfast offering of the humble bacon and egg… or sausage and egg muffin. The nearest we came to it was the main food outlet that was doing Bratwurst rolls (I hope they weren’t a result of poor bratwurst sales at a Christmas market!) so two bratwurst rolls, one tea and one coffee (and £15 lighter in the wallet) had to do. I know the food outlets at shows normally charge a premium.. but seriously guys… £15.

One of the most innovative ideas at the show was something from a company called MOGO Freedom.

Matjaz Korosec and Ross Design from Germany followed the adage of less is more – the luxury lies in its simplicity. In its simplest form it’s a bed in a box… that you can tow. Now it’s not going to replace a caravan, but, and here is the clever bit, for avid campers that want something a bit more than a bit of canvas over their head at night but don’t want to give up the simple freedom of camping this might just be the thing that they are looking for. It is of course a bit more than a bed in a box. The bed rises up electrically to reveal a large storage area and both sides of the box open up to form a roof. The great thing about it is it will store in a normal size garage and it’s a maximum of 750 Kg’s so no towing restrictions for younger drivers.

I think it’s a great idea as the all season alternative to a tent… go and have a look at the website… http://www.mogofreedom.com/

Doing the rounds of some of the smaller exhibitors stands we chatted to the guys from Equipmart Ltd about their new KIAM inverter generators which really are pushing the price point for 1000 watt and 2000 watt inverter generators. Hopefully I’ll be able to include KIAM in a Caravan Chronicles generator shoot out and review later this year.  (http://kiamproducts.co.uk/generator/petrol-inverter.html )

Make sure you don’t forget your wallet (or purse!) as Towsure once again are hosting the Towsure Accessory Superstore which has some great show deals. It always amazes me just how much stuff they can pack into their stand.

We did mooch round some motorhomes and as caravanners we can appreciate the different requirements that motorhomers and caravanners have for their particular chosen mode of accommodation. However we did come across Moto-Trek’s Euro-Trekka range and one in particular, the tag axle Euro-Trekka II did have us thinking… Hmmm. It has two slide out’s, a big 700 Kg payload and a 1600Kg towing limit. Only question is as Andy Harris asks… can you make toast in it?

So what did we think?…

Well if the crowds that we saw are anything to go by, I think it’s going to be another record-breaking show. It was great to see some new exhibitors to the show, especially Airstream and I hope that they and the others continue. All the stalwarts were there – Towsure, Isabella etc. Event City is an ideal location although I wonder how the show can grow apart from extending the number of days it’s open for. I did think that this year there were less leisure homes and lodges on show than previous years and maybe that one option would be to have these in a separate show all of their own so both could expand.

Definitely worth a visit, especially if you don’t want to travel down to the NEC next month.

Have you got the North’s biggest outdoor leisure show in your diary? 2015 promises to be a bumper year for the Caravan & Motorhome Show at Event City offering a huge choice of the latest models of touring caravans, motorhomes and holiday homes.

With over 300 exhibitors there is an incredible choice of new model caravans and motorhomes from all the leading manufacturers. In 2015, the show will feature more product launches than ever before, with new layouts being exclusively unveiled by leading manufacturers Bailey and Swift.

Last year the show saw a record breaking 27,917 visitors, with attendance up 13% on the previous year and 2015 aims to smash this target to be the biggest yet.

For the first time, in 2015, AIRSTREAM & Company will be exhibiting at The Caravan & Motorhome Show. Specialists in ‘cool camping trailers’, the team will be bringing a splash of silver to the Manchester event with three of its iconic brands set to be displayed.

Leading accessory retailer Towsure will be returning to The Caravan & Motorhome Show for a second year to host the Towsure Accessory Superstore. They will bring along their massive range of products from bike-racks to barbecues, sat-navs to outdoor furniture. Towsure will also be offering lots of special show-only offers and discounts too!

Visitors can swing by The Food & Travel Stage to see Simon Reeve, Charley Boorman and Martin Dorey from ‘One Man and His Campervan’ cook up their favourite dishes and tell tales from their many adventures.

Sam North, Show Director, said: “We’re hoping to build on the success of last year’s show and deliver the best show to date. The 2015 event will offer something for all ages; the return of Great Days Out will provide entertainment for all the family, while those on the hunt for a new caravan or motorhome can browse the extensive collection of the latest models.”

Sue and I will be there for the opening on Thursday 15th January and hopefully tweeting and posting updates directly from the show.