You know when you have built, modified or ‘tweaked’ something and it works as you planned, but there is always this feeling that it’s not quite right… well I had the same feeling last night. Although the mod to the jockey wheel did everything I wanted, I’d lost some of the functionality, namely the original Al-Ko handle.

I don’t like having bits left over and the handle was no exception. I needed a way of attaching it so it could be used as intended.

I pondered on how to attach it and in one of those cartoon lightbulb above the head moments while contemplating either throwing the cat off the bed or getting up, I could use a 19mm socket… an obviously simple solution.

I had in one of the draws of my big red toolbox a selection of old sockets that for one reason or another had been deposited in my “It will come in useful sometime” draw. I managed to find a 3/8’s drive 19mm socket of dubious origin, but for what I wanted it would do fine. The shaft of the handle was 10mm dia so it was just about a snug fit into the square drive hole for the socket. Unfortunately I’d cut the handle off with the intention of leaving as much stub as possible to fit inside the long nut… (If you are reading this and havent read “Jockey Wheel Mod” you won’t have a clue what I’m on about.. but stick with it) Which ment I’d have to do a bit of serious metal removal with a Dremel. It would have been easier to use the small milling machine, but by the time it was set up I could have finished the job with a Dremel. I only needed to attack one side of the drive hole and chamfer it off at about 45 degrees. 10 minutes later, the socket was suitably ‘adapted’.

The next job was to cross drill through the socket so I could install a 40mm long 3mm dia roll pin. As the socket had found its way into my  “It will come in useful sometime” draw I guess it was because I’d found one of the other sockets in the past to be made out of hi-tensile peanut butter… so I didn’t anticipate any problems drilling it and a normal HSS drill bit whizzed through it without any problems… a bit of cutting oil kept things “oiled” so to speak! It only things left to do now was to clean the swarf out with the air line, wipe off the remainder of the cutting oil and install a roll pin. 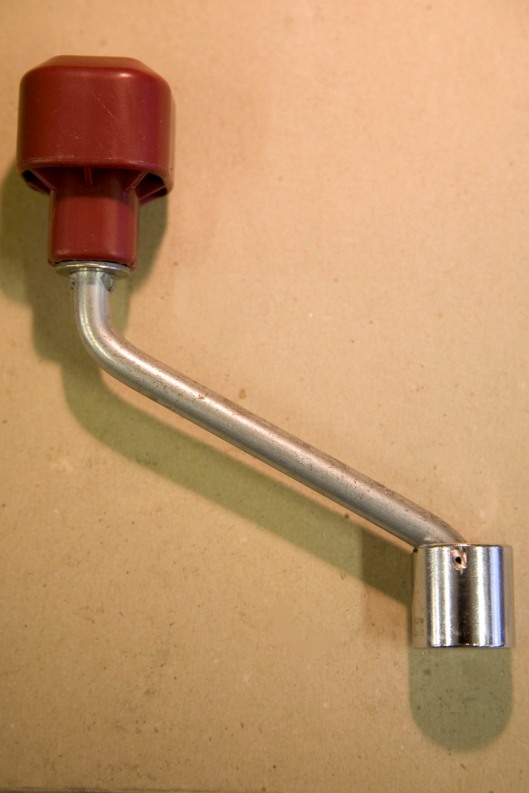 It only remains to go and give it a twirl and find a suitable home for it in the tow vehicle.

One thought I did have – Al-Ko could modify their jockey wheel so that you had to use the same sort of secure ‘plug’ that is used on their wheel locks. If the jockey wheel was made so that the fitting was recessed as it is in the wheel lock, then it would be almost impossible to wind up and down. If they also used the same idea on the jockey wheel clamp so it could not be released from the chassis, it would add another level of security.

Hmm… I can feel another visit to the Bat Cave coming on!