After my Bicycle Conveyance Contrivance posting a couple of days ago, I have been thinking about the modification needed to make sure the jockey wheel cleared the bike rack. My original Idea was to simply remove the roll pin holding the handle onto the inner threaded rod and replace it with a “R” type clip. However, on removing the roll pin, it was obvious that the cranked handle was designed to hold the threaded rod in the upper shaft of the jockey wheel. Right, plan B then.

The top of the Al-Ko jockey wheel

I have always thought that if you can slow someone down that is going to try to deprive you permanently of something, then they will look somewhere else. With that in mind I thought if there wasn’t a handle on the jockey wheel, it would be an inconvenience to someone who thought they deserved our caravan more than us. As the steadies require the use of a 19mm socket attachment in the power driver or the cranked winding handle… and as it happens, the Al-Ko wheel lock also required a 19mm socket, by a bit of logical thinking, I thought “A-ha a nut that uses the same size 19mm socket could be a way forward.”  Well, if the truth be told, I opened my big divided tray of assorted nuts… looked at one and thought “that looks about right,” then thought “I’ll bet that is the same size as the steady nuts.”

To the Bat Cave…. again! 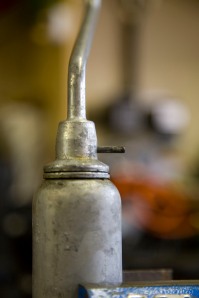 The pin almost out. Don’t try and drift it out with the assembly held in a vice. Use an Engineers Block or something substantial to rest the assembly on.

The first job was to drift out the roll pin holding the handle on the main assembly. Using a small engineers hammer and the right sized drift, that was accomplished fairly easily. The roll pin was thrown away, once used it’s always better to replace with a new one.

Once the pin was out the handle could be “persuaded” to come off the shaft.

While I was contemplating which way to go… even thinking of welding the nut on which would have ment some parts of the assembly would be unserviceable, I started looking at the top section of the tube. The hole that the threaded rod passes through has a nylon spacer, It looks like the end of the tube is swaged down before being galvanised and that cannot create a hole small enough, so a nylon insert is used. If I put an M12 nut on to the top of the threaded rod, it would simply drop through the hole. I could use a washer, but that then would be talking all the load. It would work, but it’s not good engineering. I looked at the handle again… I now know why they had made the part of the handle that attaches  to the threaded rod flared at the bottom, it was to help spread the load over the shim washer. Right, I had the answer. Cut the flared section off the handle and fit the nut onto the small stub that was left.

The next thing I needed was a long nut… off to see my Bat Cave engineering supplier then. I’ve been going to Frances Kirk for around 35 years for all my engineering bits and bobs… if there is ever an odd sized thread, they will have the nut, bolt, tap and die for it.

A suitable nut obtained, it was time to do some drilling. I wanted to use the same size roll pin to hold  the nut on to the handle stub as the one that would hold the stub onto the top of the threaded rod. I clamped the stub and the nut together with a G clamp and drilled a 3mm pilot hole through them both.

The next step was to open this out to 4mm. This meant that I could use 4mm roll pins for both sections. It also made it easier in the future if anything had to come apart as I would only need one size of roll pin. 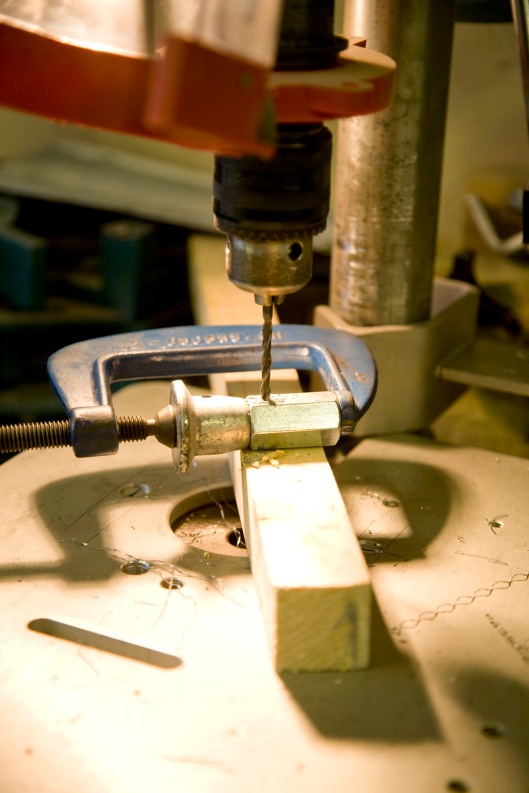 The hole was opened up and a reamer was run through. 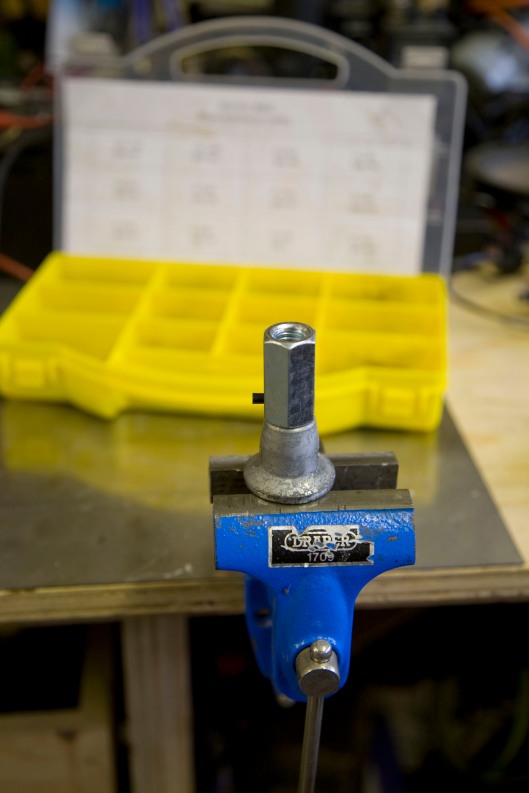 A roll pin was driven into the newly drilled hole, unfortunately it was a little too long, so before driving it fully home it was trimmed down using a Dremel and cut off wheel.

Once the end had been trimmed, it was fully driven home so that both ends were flush with the hole. The only thing that remained to do was install the nut and handle stub back onto the rest of the jockey wheel assembly.

Before I assembled everything I gave the internals a liberal greasing and made sure any bearing surfaces were smooth and lightly greased. Now the jockey wheel can be wound up and down using the Makita power driver, the speed brace that was used for the stabilisers or the small handle that came with the Al-Ko wheel lock.

Next task is to go a re-install it on the caravan and I’m going to hitch up with the bike rack fitted and try to measure some angles. I had a comment left from Andy Ingham on my last post regarding inclines…. I had done some brief measurements… but I’d like to actually confirm these as accurately as I can.