The additions to the Wolf continue, despite the recent news from Glossop Caravans at our last service, that we have damp in the caravan. Hopefully we will hear soon whether or not its covered by the warranty. So, moving on, a couple of additions to the  VW Amarok. After installing the sliding bed, I noticed that there was some space available between the end of the bed and the truck bed at the cab end. It was only 70 mm, but I thought with a bit of creative construction, I could come up with a contrivance to hold some of the stuff and tools that we normally schlep about with us. Using 18mm birch ply phenol finished board I came up with a storage box that is fitted to the bed and projects forward right up to the truck bed front wall… 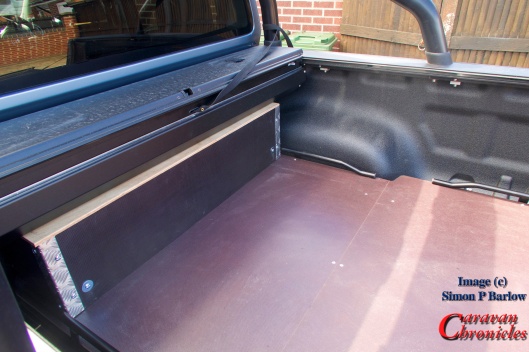 …and fits neatly under the ‘roll n lock’ cover. It sill gives us a lot of space on the slide out bed for our storage boxes.

I can fit all of our (well my) bits and bobs in there… from ratchet straps, nose weight gauge, wheel nut torque wrench, tools, work gloves and of course a spare fire extinguisher. All the tow straps and recovery kit is kept inside the cab in the dry behind the rear seat with the Amarok’s tool kit. One nice little bonus is the Amarok comes with a hydraulic bottle jack as standard and the adaptor do-hicky used to jack up an Alko chassis fits perfectly on the VW jack, so now no need to carry a jack for the caravan! (I just wish wheels were interchangeable between tow vehicle and caravan as they are on a lot of outfits in America).

One last job will be to paint the lid with a waterproof resin paint. As its such a close fit under the roll n lock’ cover I haven’t bothered with any hasp to keep the lid closed, I’ll just add a couple of small plastic rubbing strips to make it a tight fit once it’s painted. 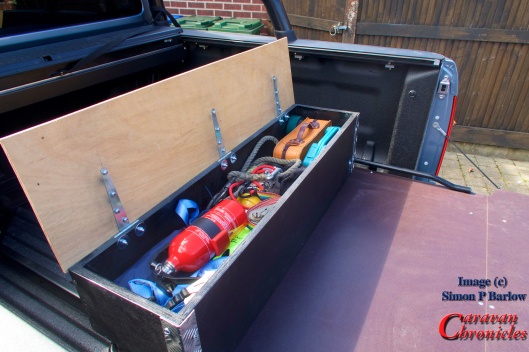 However, it has not compromised on space for the rest of the slide out. I can still fit all the boxes we used to put in the Freelander and three extra ones… plus space for around five or six more. 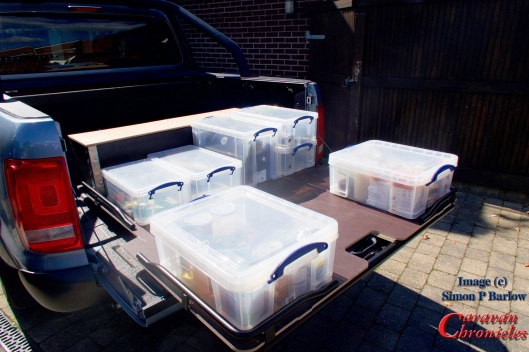 With a bit of rearranging, it would be easy to create a long space big enough for an awning bag… if we had one, or storage of something bulky. As we are not really limited to weight (we can put around 1000 Kgs in the back) the options are endless. At this point, I can see why pickups are a great choice. 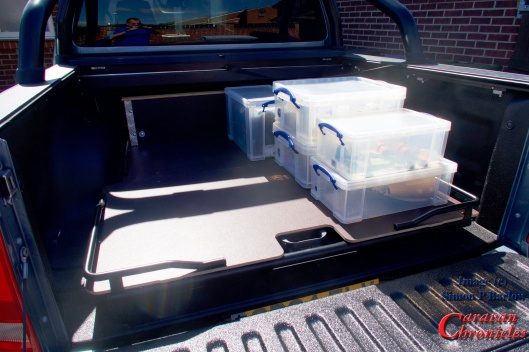 The other addition, and it was something we fitted to the Freelander as well is side window deflectors. On the Freelander I installed the stick-on type which have been excellent in the 7 years they have been fitted and not shown any sign of becoming unstuck, however I came across a German company “HEKO” that makes OEM ‘in window’ fitting deflectors for various vehicle companies and opted to try these in preference to the stick-on type. 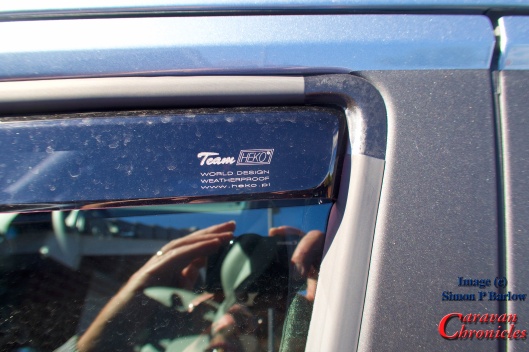 In my opinion, they look much neater and give it a factory fitted look and finish… 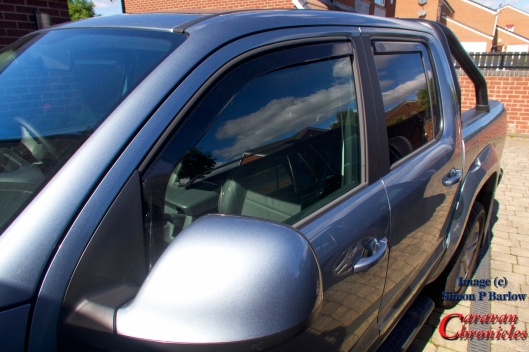 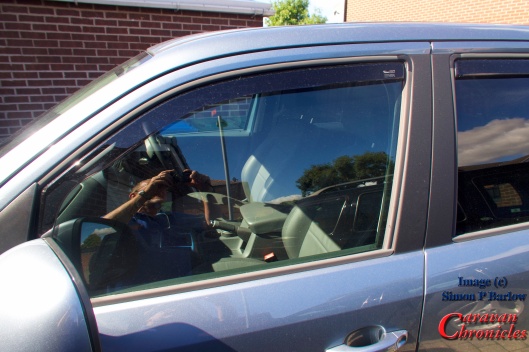 I have found that driving with the windows down about 2 inches, even in heavy rain, there is no rain blown through the opening and it also stops the problem of excess water from the sweep of the windscreen wipers streaming down the driver’s side window blurring the view of the door mirror.

So wants next? Well I still have the bike rack to order and install, although I have made a start and ordered (and received) some landing pad feet from California that will allow me to install a pair of Thule Aero Cross Bars onto the ‘Roll n Lock’ sides and I’m still being a bit indecisive about which dash cam to go for. I originally thought the DDPai M6+ was the one…. but then I saw some reviews for the Thinkware F770…. then I spotted some reviews for the Blackview DRG650GW 2 channel… Aaaagh! I think I might have to talk to some of the guys at the forthcoming NEC show.

3 thoughts on “A Place for Everything…”