A couple of days ago Tranquil Touring Parks released an app (press release) for the iPhone and Android platforms. I’ve been playing about with the App on my iPhone 5 for a couple of days and here’s a quick review.

The app downloaded and installed without any problems. On launching you are greeted with the home screen:

For me, I found the text below the icons rather small and it seemed to get lost in the background image. I know space on a small screen is limited, but maybe reducing it to 6 icons and larger text on the home screen and swiping sideways to access the next six icons would be an improvement. However there is an option… touch the small icon at the top right of the screen and it dynamically slides the main screen off to the right and displays a text list of the home page:

Clicking on the “Park Finder” icon brings up another page with a similar layout:

Now this was where I really started to have an issue. On the home screen at least you would get to know the icons and you could just tap without looking at the text, with the “Park Finder” all the icons are the same and the small text size was an issue. Using the icon in the top right only brings you the list from the home screen. Maybe it should be a list of the items on the current page instead.

Continuing on, tapping “Cheshire” brings up a list of sites in Cheshire:

The App displays a list of sites available in Cheshire (In this case only one) and tapping on the site displays all the information about the site. Thankfully this time on a white background. However the “pinch to zoom” feature of the iPhone doesn’t have any affect on the text size in the site listing.

Helpfully at the bottom of the screen there are four icons that allow you to display a map for the site, bring up the web page, email them or telephone them. 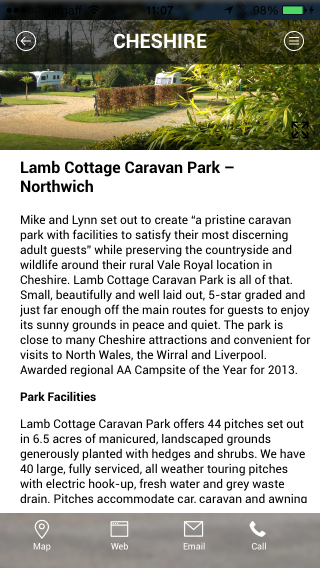 Touching the ‘left arrow’ at the top of the screen takes you back a page.

Returning to the home page, “Special Offers” brings up a page that lists, as you would expect, any special offers from the listed sites… 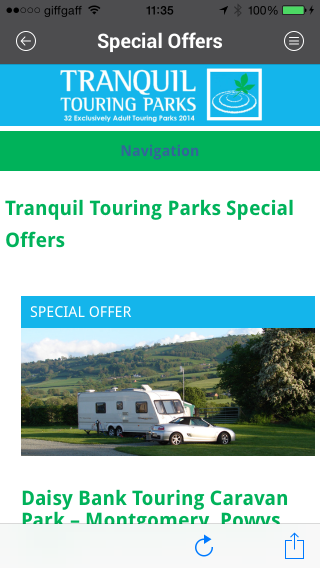 The next section I tried is the ‘Directory”. This is a similar screen to the “Park Finder” screen listing each county. Picking on “Cheshire” again…. 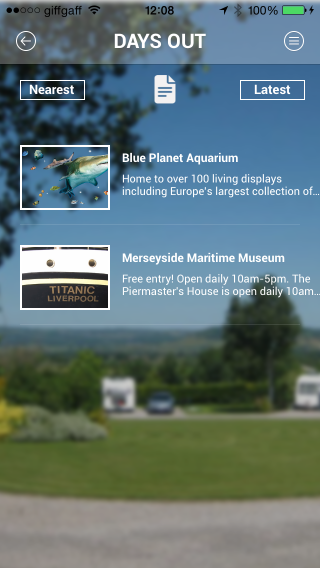 Choosing “Days Out” it lists all the attractions within easy reach. Now this is where it starts to become interesting. Using something called geofencing and iBeacon technology taping “Nearest” picks up on your location and can display attractions around the area you are located. So for example if you were at a site in South Lancashire, it could display attractions in north Cheshire, Merseyside and Greater Manchester. ( I noticed that “Greater Manchester” isn’t listed as one of the counties… shame really as we do have lots of great attractions!)

Moving on, the other Icons on the home screen are pretty much self-explanatory… About Us, Latest News, Business News, Facebook & Twitter.

Now the last two require you to enter some information…

The minimum information you have to give is your name and email address, everything else seems to be optional. Once the information is entered and saved, you can then access your profile…

…and add an image for your profile…. 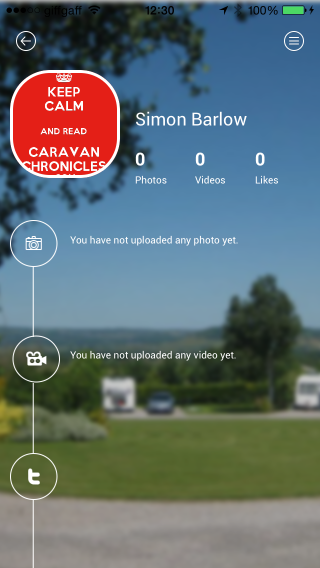 On the home screen there is also an Icon for “Messages” now as I have only just registered and not been to any Tranquil Touring Park sites, I’ve not received any messages yet, so I’m not able to give you any information about this aspect of the app.

So what do I think of it so far?

Obviously it’s there to promote Tranquil Touring Parks sites and there is nothing wrong with that, and there aren’t adverts popping up every time you change screens. As the app is location sensitive, the ability to let you know about any events that are happening around you is going to be quite useful. How many times have you been somewhere only to find out that you missed something while you were away because you didn’t know about it. As the app is taken up by more people, a point will come where event organisers will want their event pushed to users knowing it is a targeted audience… there is no point in advertising a “Haggis Hunt” in the Highlands to people caravanning in Cornwall.

I’m not sure how the information will be sent to the app. If it’s a drip feed of messages throughout the day, then it could become annoying, however if it’s batch sent – in the early evening ready for the next day for example, then I can see that working well and help in planning what to do… especially given the British weather!

On the whole, despite the text size, I think it’s a good idea, and think that it will grow. A lot of the Food & Drink, Days Out, Shopping & Local Services categories still need data adding but I suspect this is ongoing and they will fill up fairly quickly.

I would like to see some form of help screen… but I managed without, so maybe it’s not that important. I also thought it might be useful for some type of feed back on the places and attractions.. but then again there are a myriad of sites on the internet that offer this information, so maybe again, it’s not important.

3 thoughts on “Review of the Tranquil Touring Parks App…”