Well, at last our 2012 season is underway. Since we got back from Wrexham on the 11th December, Sue has been on call to the hospital with the exception of 6 days since then. The first chance we have to get away is next weekend, which is half term and usually busy. Not a problem I thought, logging on to the Camping & Caravanning Club web site… I can search on available pitches. Unfortunately, the booking system was taken back into the stone age late last year and the ability to do almost anything with the booking system is a nightmare. All is not lost I thought. I logged in to the Caravan Clubs booking system. Well, that insisted on listing sites that were still closed, even though I’d put in our travelling dates. Two hours later, and after several phone calls to different sites, I managed to get us booked in at the C & CC Oswestry. So next weekend, we are starting our 2012 season at last!

Looking ahead, we are also starting our continental adventures. After spending so many years flying the plane all over Europe, it is strange to now have to plan taking the caravan. It was so easy… fill in a flight plan a couple of hours before we wanted to go, load the plane, fill up and go. A couple of hours later we could be in France, Holland wherever. Taking the caravan is a little different, and rather than have an exploratory few days… we are driving down to the Dordogne for five days!

It all started on Caravan Talk…. there was a discussion about caravanners “off roading” in their 4 x 4’s and someone…. lets call him “Big Jimmy“… mentioned “soft roading” an easier version, i.e. not getting up to your axles in the sticky brown stuff. So he offered a few days soft roading at his place… La Tournerie Ferme, which just happens to be near Aubas in the Dordogne region of French France.

Now not wanting to miss out on a bit of soft roading… or a bit of continental warmth in October I signed us up without haste. Now at this point, what I know about taking a caravan to French France or indeed anywhere on the continent, you could write on the back of a VOSA weigh bridge ticket. First things first, what have the two main caravanning clubs to offer?

After an afternoon browsing the CC and the C & CC’s web sites and ordering the Caravan Europe book from the CC’s web site, some hasty ‘googling’ of ferry prices and finding what I thought was a good deal – £78 return to take the Freelander and caravan between Dover and Dunkirk, bearing in mind the total length of the outfit is 38′ 6″. it costs us more than that with Red Funnel to take the Freelander from Southampton to the Isle of Wight when we go and visit friends there. I also booked us in to the Canterbury C & CC site… we stayed there last year and I remembered that they could accommodate ferry travellers and we know it is an easy tow, although a long one from Manchester. At least the chaos that the Olympics will bring will be over by then.

So what else is happening…. well our new heated towel rail arrived for the caravan, so I’ll be fitting that this weekend and writing a “how to…” about fitting it, and I have almost finished an “Easy Fault Finding” guide for caravan electrics to add to the “Help Guides“. I have also been asked to write something on terminating cables – so that is in the pipeline.

The last project is the possibility of fitting an Insync brake assist unit. I have suggested a slight ‘upgrade’ to the system. I would like to be able to see that the unit is operating while I am sat in the drivers seat. So I put forward a suggestion to Kev Jackson that maybe a pressure switch could be fitted in the air line that operated a warning light that could be placed inside the caravan within view of the rear view mirror. If you touched the brakes, the pressure would build in the system and turn on the light, which you would be able to see and know the system was operating correctly. To my mind, that would be a big improvement over the Al-Ko ATC system as you are never sure if its is working or not. I’ll have to wait and see if anything comes of it. 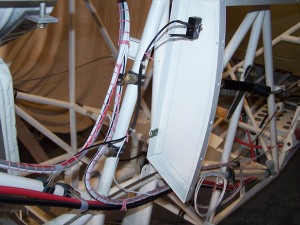 Some traditional lacing techniques being used on Anthony's aircraft wiring.

Only slightly related to caravanning, my friend Anthony Brown… a left seat jockey for the big orange airline has finally ordered the engine for the plane he is building. What’s that got to do with caravanning?…. well I designed and cabled all the electrical systems on the plane and when it comes to final assembly and flight test, it will be done down at Sleap Airfield in Shropshire… which is a 2 hour drive for me, so I will hopefully be taking the caravan down and parking it outside the hanger for a few days while the final assembly and test flying is done. That is if we can get permission from the airfield of course! Watch this space.