We had chance to get away for a few days and decided to visit North Wales. We chose Tyddyn Du Touring Park, one of the Tranquil Touring Parks

The site we had chosen didn’t allow arrivals before 2:00PM, so it was an unusually lazy start to the day. Loading up the Freelander in the Manchester drizzle wasn’t much fun, but the forecast for the rest of the week said it was going to improve. We left home and arrived at the caravan storage unit still in the grey drizzle, and got a bit damp transferring our bits and pieces over to the caravan, but by the time we were hitching up the rain eased off. We pulled out of the compound at 1:30 and the sat-nav predicted our arrival to be around 3:15 and 87 miles down the road.

As we headed out along the M60 towards the M56 the heavens opened and the investment in new wiper blades a few days earlier was justified. By the time we passed Manchester Airport on the M56 the rain stopped and in the distance we could see it seemed a lot brighter. The traffic was light and it wasn’t long before we were leaving the motorway and on to the A494 in the bright sunshine. Years ago, not long after we were first married we used to travel down to Rhos to water ski and camp on a site near Abergele and the old road became a well driven path. I only just recognised RAF Sealand and missed what I remember as the turn off for Shotton Paper… if it still exists!

The A55 has made a huge difference.  We whizzed past St Asaph… I only just recognised the white spire ….and in no time at all it seemed we were at Pensarn following the North Wales coastline. Over the years we had flown that stretch of coast dozens of times flying to either RAF Mona or Caernarfon and had watched the wind farm slowly rise out of the sea. This was however the first time we had seen it from terra firma. I had input the entrance to Tyddyn Du Touring Park as a POI into the Sat Nav (see Create accurate POI’s for your Sat-Nav on how to do this) so it was a simple matter of following the directions. The predicted arrival time of 3:15 was spot on as we pulled into the entrance gate.

Tyddyn Du Touring Park is laid out on the side of a hill and the entrance driveway gently climbs up toward reception. You can see a selection of photos of the site on the Tyddyn Du gallery page. Checking in is a simple matter and you are asked to follow two of the staff to your assigned pitch. We had been given pitch C10 which was at the top of the site. Now at this point you need to have practiced hill starts with your caravan. As you climb higher up the site the roads get steeper, especially on a couple of the turns. It is manageable but take care as the site roads are narrow on the turns. Once on the level terrace the staff help you unhitch and swing the caravan to face out towards the spectacular sea view.

Tuesday morning we drove into Conwy and parked round the back of the castle on Llanwrst Rd (B5106) public car park, which was a reasonable £2 for 8 hours parking. From the car park there is a small tunnel under the main railway line that takes you up to Rose Hill St inside the town’s ancient walls. We wandered through the town towards the quay and walked down to the UK’s smallest house on the quay side. Strolling back into the town we settled on Pen-Y-Bryn Tea Rooms on High St for a light late breakfast and to study the guide we had picked up from the caravan site. It suggested a walk from Conwy over the bridge to Deganwy. 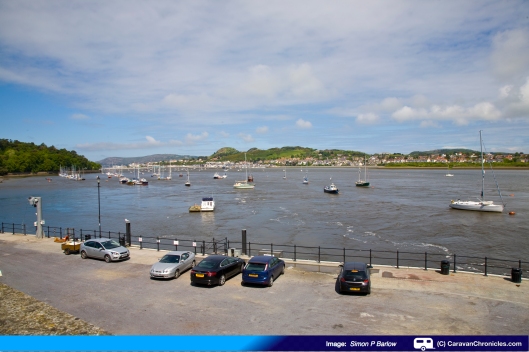 Looking from Conwy Quay over towards Deganwy and The Great Orme

From the quay we crossed Conwy road bridge which gives great views down the Conwy river towards thew sea. The walk is easy-going and for the most part flat, the guide suggests it takes about 35 minutes, but at a gentle stroll it’s more like 50 minutes.

Looking back towards Conwy Quay from the road bridge

From the road bridge looking towards The Great Orme 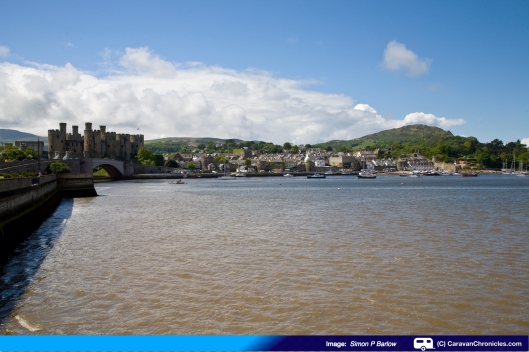 From Deganwy you can take a water taxi from the small jetty back to Conwy or the marina. There is a phone number on the information sign just over the level crossing

After a good days walking and both of us catching the sun a little … I know we should take sun cream with us… we arrived back at the car park for the short drive back to the caravan site. We sat out for a while, but the wind off the sea made it feel just a little too chilly to sit out for too long… well after all it is only May!

As there was little cloud cover, the temperature had dropped quite low last night but it did mean that we woke up to clear blue skies and it was starting to warm up fast. We had chosen to go and explore Caernarfon and the Castle today and to check out parking for the Welsh Mountain Railway. Driving to Caernarfon from the site takes about 30 minutes and is an easy run. Follow the signs for Caernarfon town centre and there is a handy multistory carpark right off the A487 roundabout. Again parking for the day was very reasonable. Leaving the car park on foot, we walked up Pool Hill and turned left onto Bridge St and into Castle Square which has several street cafe’s where you can sit outside and people watch. We headed on towards the castle. 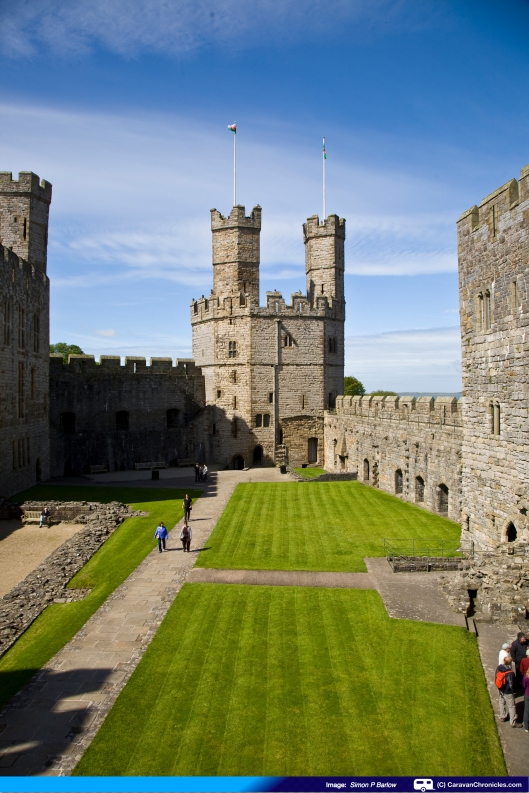 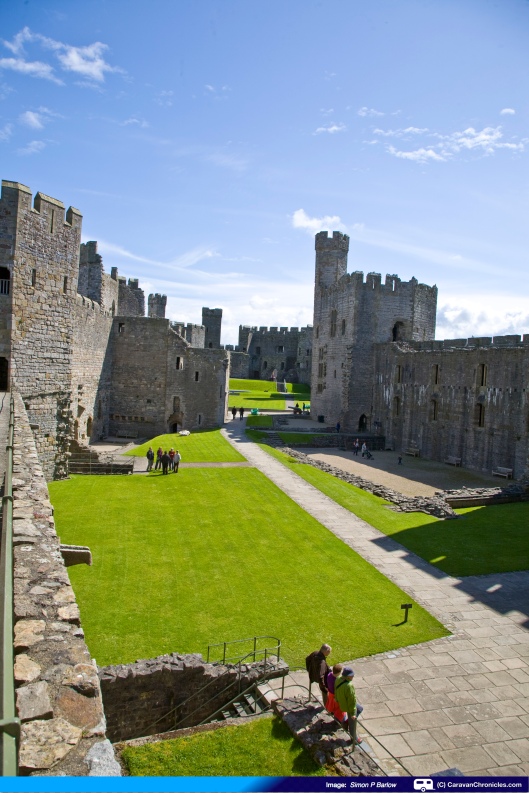 Walking round the castle walls gives great views over Caernarfon and the surrounding area. Some of the spiral staircases can be narrow but there is lots to explore in some of the small rooms that are hidden in the 15 foot thick castle walls. The view below is looking along the quay towards the Welsh Highland Railway station. 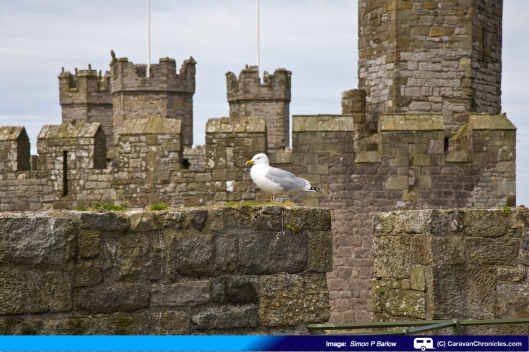 This chap was definitely less nervous than Sue on top of some of the towers!

I remember as a child coming on holiday to Llandudno with my parents for a week. One day, only a week or so after the investiture of The Prince of Wales we had a trip to Caernarfon to see the place where it all happened. I was really surprised to find out that was way back in 1969… I’m now feeling quite old! When I visited back then, there was still a glass canopy and seating on both sides of the castle grounds.

We ended up back in Castle Square after walking round the outside of the castle and along the quay for a coffee and a spot of late lunch sat in the sunshine doing a bit of people watching.

Thursday morning started off cloudy with some light drizzle.. it seems we might just have picked the wrong day to take the Welsh Highland Railway to Porthmadog. The train was due to depart Caernarfon at 10:00 so we left the site around 8:45 to make sure we didn’t miss it. There is a small car park at the station that costs just £2 for the day.. or the car park on the quay side is £4 if the station car park is full. A return tickets to Porthmadog costs £35 and if you want to up-grade to first class, it’s another £10 each way. It’s not cheap, but after doing the trip, we think it’s reasonable value.

When we bought our tickets we were given a small plastic ‘tab’ that gives you a 10% discount on any future tickets on the Welsh Highland Railway or the Ffestiniog Railway. Handy if want to do the Ffestiniog another day.

Our Engine & Driver for the day changing ends… 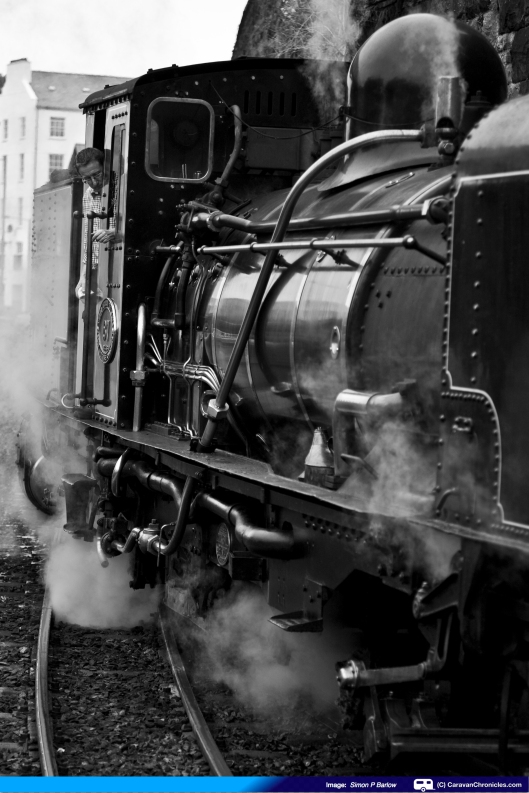 Why is it steam engines always look better in ‘moody’ black & white?

The train journey from Caernarfon to Porthmadog takes about 2 hours 10 minutes… we were slightly delayed due to “sheep & lamb on the line” in the best railway tradition of delays. Most of the hill tops were still covered in mist but that just added to the ever-changing scenery…. I’m not going to add lots of photos for the journey, you have to experience it real-time, not through a lens.

It wasn’t until 20th April 2011 that the last section of the line from Pont Croesor to Porthmadog was completed finally linking up with the Harbour Station used by the Ffestiniog Railway and in 2012 the Cob widening project was started to allowed both the Welsh Highland railway and the Ffestiniog railway to have separate platforms. 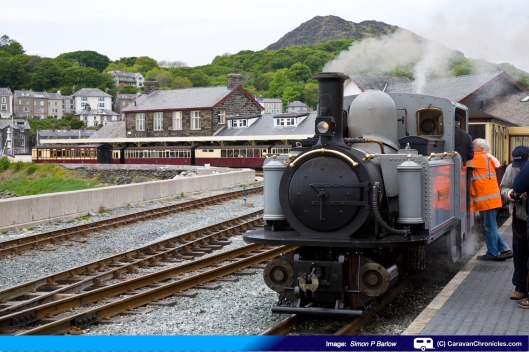 Porthmadog was originally built as a harbour to export slate from the nearby mines, the harbour now has a multitude of private sailing boats and is home to Porthmadog Maritime Museum housed in one of the old slate sheds next to the Harbour Master’s Office. The trains have a trolly service for hot and cold drinks, one of the range of beers offered is from Purple Moose Brewery which is based in the town and you can go on a tour of the brewery.

Top Tip: The on-board train staff sell a 60 page glossy book for £5 – it is well worth purchasing, it has a detailed fold out map of the line and tells you about all the stations and the history of the line. It has some wonderful colour photos too.

The train departed from Porthmadog at 14:05 and was due in Caernarfon at 16:20. The mist on the hill tops had long since disappeared and the scenery was constantly changing again as the sun appeared and disappeared round the passing clouds. By the time we got back Caernarfon was in brilliant sunshine again with just the odd wispy cloud here and there.

Arriving back at Tyddyn Du, the deck chairs were deployed and we spent some time sat out in the early evening sunshine with a drink and watching con-trails turn into wispy clouds and thinking, it doesn’t get much better than this. 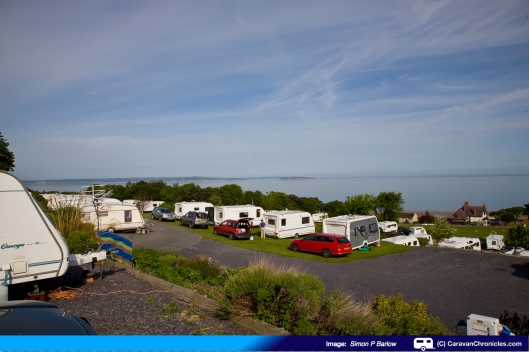 What we thought of Tyddyn Du Touring Park…

The site is ideally located for exploring the north-west corner of Wales and has some fantastic views. However it should be noted that as it’s on the side of a hill, some of the access to the pitches is quite steep and tight on the turns, so keep this in mind. The facilities block was of a good standard and clean. The water was very hot, especially if you are one of the first in the showers in the morning. We found the facilities block was dark inside, Sue especially thought the shower cubicles in the female section were very dark. There is only one Elsan point behind the facilities block and grey waste disposal was the motor home service point. None of the water taps we saw indicated if they were for drinking water or otherwise and they all had short lengths of hose permanently attached, so it was unclear if it was drinking or washing out grey waste containers. Sitting outside the road noise from the A55 is ever-present in the background but inside the caravan we didn’t notice it. The staff were friendly and helpful and the neighbours on the seasonal pitches were nice to talk too and had lots of good advice about things to see and do. Would we go back? – YES.