We wandered down the main drive to the camp site, past the dog exercise field and turned right on to Wick Lane. Following the lane to the south we heard a couple of jets in the distance. Since arriving on site we had heard quite a few helicopters making their way in and out of the festival site, I guess taking artists in for their sound-checks and providing some of the aerial shots seen on the news. They weren’t obtrusive and it wasn’t constant and even after hanging up my flying gloves I still turn to look up at them. We wandered further down the lane stopping at the entrance gates to each field to look at the view, each field giving a slightly different vista. We could hear a jet doing a high energy turn somewhere in the distance.

A fast jet, low level has a distinctive noise, and by the time you have worked out the direction it’s gone. This guy was low…. 200 or 300 feet and fast, and we just caught sight of him through the hedge as he pulled up round in front of us….

… leaving a slight vapour trail from his wingtips as the humid air condensed in the low pressure above his wings…. his wingman providing top cover passed by at a higher altitude a few seconds later.

Glastonbury is just within the Yeovilton LARS (Lower Airspace Radar Service) and is classed as an AIAA (Area of Intense Aerial Activity) which extends from the surface up to 6000 feet so it’s only to be expected that from time to time, these guys are going to be tearing up the air…. hey we used to fly through Yeovilton’s airspace en route to the Channel Islands and France so I’m not going to complain! 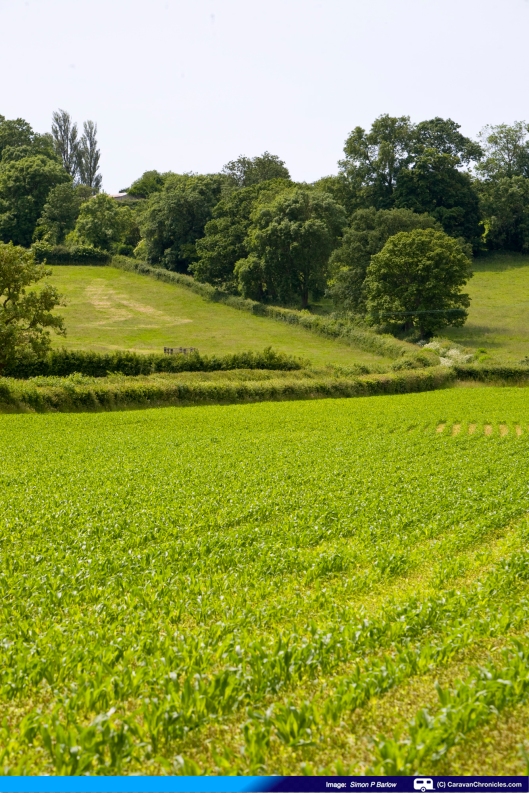 We joined the lane then at the bend just as it climbs up past the trees.  At least today we were only going to follow it up to the bend then turn right to head back towards the campsite. The afternoon was a lazy affair sat in the sun catching up on some reading and replying to emails.

We guessed that the traffic would have dissipated from the initial rush to get into the festival site so planned a short drive into Wells. The Sat Nav took us to a car park  that was now a building site…  so a quick tour round soon found another car park. We walked down a small alley and entered the main street. Unlike Glastonbury two days earlier, everyone seemed to be dressed normally. 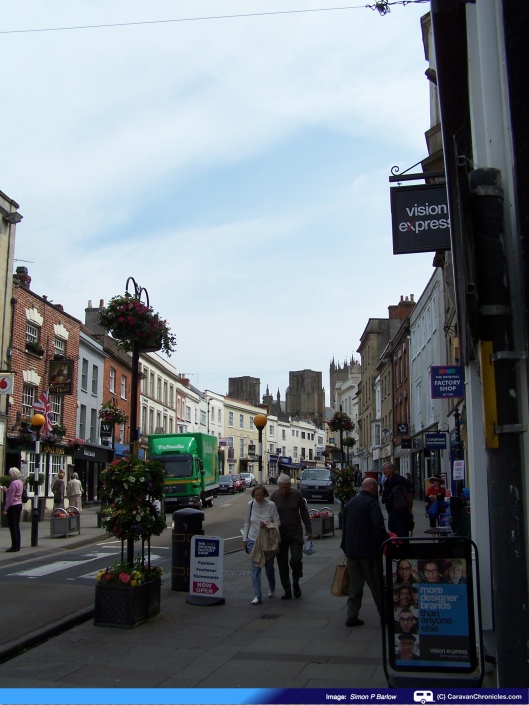 Wells – The main shopping street looking towards the Cathedral.

The main shopping street had a small stream running down a channel either side from the well… hence the name “Wells”, and it was funny to see someone walking their dog on a lead oblivious to the fact the dog was trotting along in the ‘stream’ enjoying it’s self immensely. The previous day I’d printed off a map of a walk round the town that took in the main sights and basically did a lap of the Cathedral and Bishops Palace, so armed with the map we set off up the main street to the Market Place in front of the Town Hall for the starting point.

Following the directions on the map we walked through an archway onto Cathedral Green which gave us a great view of the front facade of the Cathedral. 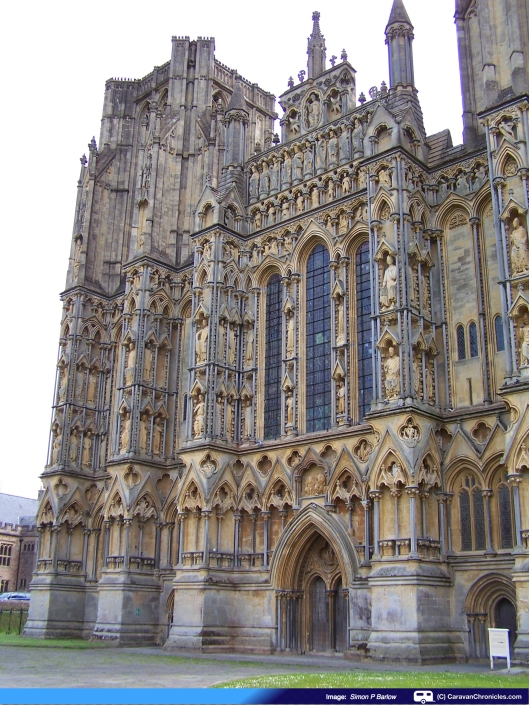 The Cathedral we see now was started in about 1175 and was based on the French designs and was the first English Cathedral built to this ‘new’ gothic design. Around 300 of its original medieval statues remain….

…. and Sue was counting each one!

Continuing our walk we crossed the green and headed towards St Andrew Street passing by the splendid clock… unfortunately we would have had to wait another 55 minutes to see it in action.

Continuing along St Andrew Street you pass by the entrance to Vicar’s Close. the houses were built in 1348 by Bishop Ralph of Shrewsbury so that the 42 Vicars of the “Vicars Choral” could live together in a community. 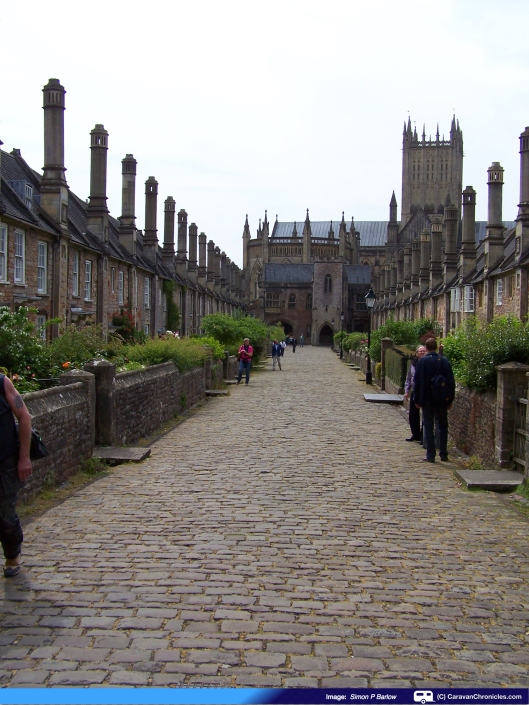 Sometime in the 15th Century the houses were given front gardens and the Chain Gate was built. Apparently it is the only complete medieval street in England.

Following the map we continued down St Andrew Street and turned right on to Tor Street, following the walls around the cathedral. At the end of the wall, we turned right again off Tor St and followed a path that took us down the side of the Bishops Palace along the moat.

The exterior walls are still complete and the moat encircles the whole Palace. 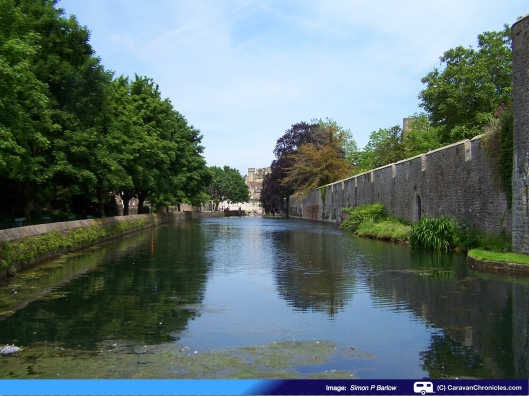 The Palace is still the main residence for the Bishop but much of the Palace and grounds are now used for Public and Private functions – it can be hired for anything from weddings to conferences.

We had finished our little tour and lunch beckoned. We found a coffee shop right on the corner of Market place and sat outside people watching while enjoying a toasted pannini.

We wandered back down High Street and by chance we stumbled on “Ye Olde Sweete Shop” where I could stock up on Coltsfoot Rock, Cough Candy and of course Winegums for Sue. We made our way back to the car park and headed back to the caravan for another lazy afternoon before the showers arrived in the early evening. 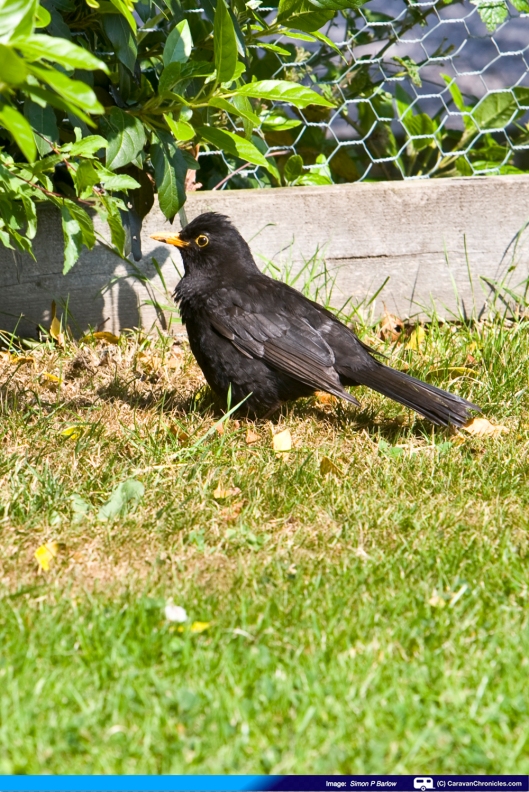 One of the frequent ‘flying’ visitors to our pitch

In part three:- We head north to Warwick, tackle a canal and get a suntan!