Arrived at Oswestry C & CC site at 12:20 yesterday after an 80 mile drive, which considering it was a Friday only took 1:40.  Leaving home, there was just the odd snowflake, but most of the way here was dry and clear. Only when we got to the outskirts of Wrexham did we get light drizzle.

The warden here is very friendly and virtually gave us our choice of pitches, I think there are only eight or ten caravans and motorhomes on site at the moment. We decided on the far end of the site and the warden walked down with us to guide us on to the pitch. 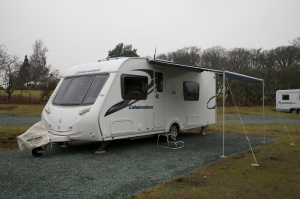 Setting up only takes us about 20 minutes, and the kettle normally goes on… or the beer and wine are opened, depending on the weather. This time was a little different. Sue filled the Aquaroll while I powered up the van’s electrics and handled the pink stuff and wastehog at the other end of the van. Returning the watering can to the front locker, I also turned on the Safefill gas bottle and went to turn the electrics on, shut the taps, fire up the heater and turn the water pump on. I always use a gas ring on the hob to purge any air out of the gas line… the ring lit… and the heater soon followed. Now for the water. I shut the drain tap and pressed the pump ‘on’ button…. nothing. Hmm. Frozen up. Bugger. I could hear the relay clicking to activate the pump, but I couldn’t hear it run. I know we were below freezing in Manchester a few nights ago, and I thought I’d got all the water out of the system anyway. Apparently not.

Now, we don’t have an electric heater with us, so I couldn’t resort to that to thaw things out. I removed the cushions above where the pump was located…. then it struck me, by now the heater was pushing out lots of blown hot air and under the front draw unit, the hot air pipe is terminated. So removing the end stopper for the pipe and re-routing it so it now enters the corner where the water heater and water pump are seemed a logical solution. 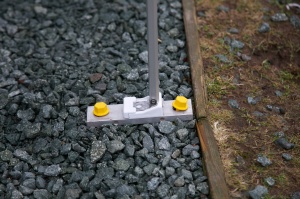 My “feet” for the Fiamma awning

While the hot air was working its magic, we wanted to open up the Fiamma caravanstor awning. We hadn’t used it at Chirk, due to the high winds, but as I’d made a couple of new feet out of aluminium for it, I wanted to give it and them a try. I’d looked at the normal way of anchoring the feet down… basically drive a peg through a hole in the foot. Now to me that was OK, but if you wanted to put the thing away in a hurry because the wind started to blow in the middle of the night, you had to start pulling out pegs. Now, supplied with the awning, are two little brackets that you can mount on the side of your caravan or mobile home to allow the supports to lock into, rather than have them on the ground. I reasoned that these could be used to anchor the supports to the ground if they were mounted on a plate. So after an hour or so in the workshop, I’d machined a couple of plates and all I can say is they work quite well. If we need to put the awning away, unclip the guy lines, unclip the feet and roll the awning up. Less than a minute and no tools. Once the wind has abated…. it can be put back up with the minimum of fuss as the plates and anchors for the guys are still pegged to the ground in the correct place.

Right, time to see if the blown air system had worked with the pump. I pushed the pump on button… and the pump rattled into life, filling the hot water tank. I opened the tap on the sink and water came spluttering out, reducing to a steady flow as the air was purged. Checked for leaks, none found. Result..! I think I will be making that a permanent modification. I’ll see if I can get an end piece that can be opened and closed as required, but having a little hot air in there when it’s cold enough to need the heater cant be a bad thing.

I have to give a quick thank you to Peter Staples from the Nottinghamshire DA of the Camping and Caravanning Club. He mentioned Caravan Chronicles on the ‘Latest News’ section of the  nottsda.co.uk web site, and looking at the stats, it seems quite a few of their members have been clicking on the link and having a read. Welcome to all the members of the Notts DA and I hope you all enjoy Caravan Chronicles. 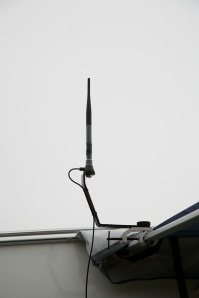 Finally, you might have noticed in the picture of the van above, an aerial sticking up above the awning. Well it’s my WiFi aerial that connects to my Bear Extender. It’s an 18db gain antenna that allows me to connect to WiFi signals that would not normally be usable due to a poor signal. I did do a review of the Bear Extender in the Equipment Reviews page.

The WiFi here at Oswestry is quite fast, and more importantly, it’s free, You have to ask for a password at reception, but logging in is simple and  easy.