Managing to get three days off recently, and not wanting to spend too long getting there, we headed off for a short break at the seaside…

As it was going to be a quick break, we hadn’t pre-loaded the caravan as usual. So Monday morning saw us packing up the Freelander with everything ready for our mini break. We have wanted to visit Southport for a while. It was one of those destinations that although being so close to home (Manchester), for some reason we had only ever been for the flower show, and that was a fair few years ago. The only other time I’ve been to Southport was for my spin and stall training many years ago when I was learning to fly, and to be honest I wasn’t taking much notice from 3000 feet back then. 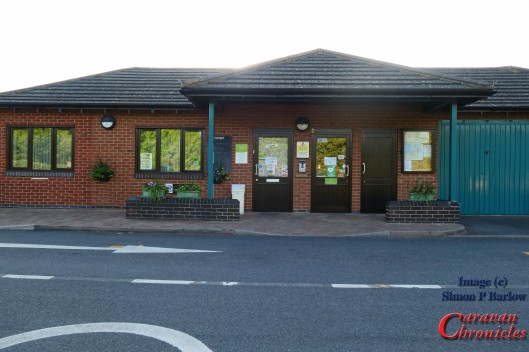 Every time we kept looking on the Caravan Club web site it was fully booked for the dates we wanted. However the site has expanded with a new section and facilities block and a quick check showed they had the three days we wanted on a super pitch.  We hitched up around 11:15 and headed out for the 53 mile 1 hour 30 min drive. The traffic Gods were being kind and all the motorways were flowing freely… well at least in our direction.

Checking in was the usual Caravan Club efficient process and we were given the usual site plan with our pitch marked up. 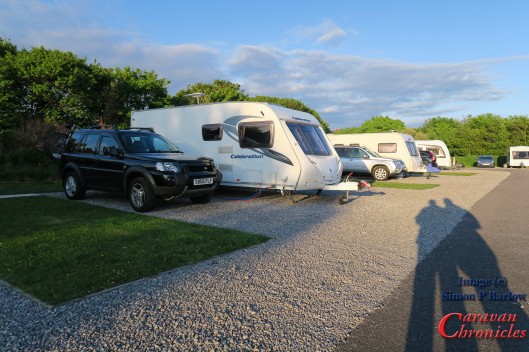 We had decided to take the bikes with us and after setting up, I off loaded the two bikes from the back of the Freelander and we geared up. One of the great things about the site is the easy fairly traffic free access to the seafront, handy if you have younger members of the family and you want to go cycling. In the information centre there are also a number of leaflets with themed cycle routes that are all suitable for beginners and range from a 3 mile to a 7 mile ride. The Caravan Club also on it’s website has an easy route that you can download.

We joined the seafront near the site and cycled north along the beach. The cycle way is separate from the path used by pedestrians, unlike Blackpool where you always seem to be avoiding the small dog on the extendable lead thirty feet away from it’s owner.

Cycle lanes on the left, pedestrians on the right

We rode north, past the amusement park… which was closed, and on under the pier. We reached the Ribble Estuary National Nature Reserve and rather than turning inland we headed back south looking for somewhere to have a late lunch. 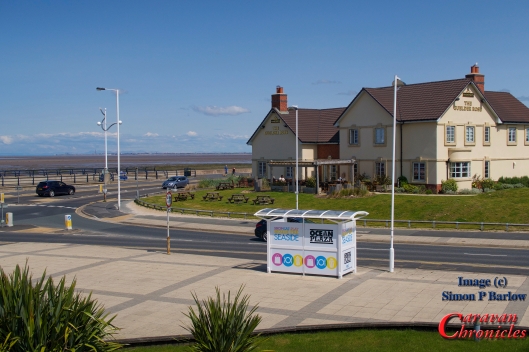 As we got back to the pier we spotted this place “The Guelder Rose” which had tables outside so we could wheel the bikes up to the table and lean them on the wall. They did have a bike shelter in the car park but it didn’t look too secure. While I sat outside Sue went in and got a couple of menus.

The view from the table was OK, and the antics of drivers on the roundabout kept us entertained. Unusually it was warm enough to be out cycling in short sleeves but sat on the corner outside, the wind still had that late spring chill about it. Suitably refreshed Sue went in and paid the bill and we walked the bikes over the road and continued south under the pier and back towards the site.

When you reach the shoal of fish, you know you are nearly back. We crossed over the road and headed towards Southport Eco Centre (which never seemed to have the wind turbine operating) which is on the quiet road that leads back to the site.

Lord Street in Southport is famous for it’s shopping and the last time I can remember being there was as a child in the late 60’s being dragged up and down by my parents. I suspect a lot has changed since then. It’s about a 6 or 7 minute walk from the site past Morrisons. Lord Street is about a mile long, with a roundabout marking each end. It was mainly built in the 19th Century and a lot of the shops still retain the glazed canopies that protected the early shoppers from the vagaries of the weather.

Walking north along Lord Street one of the first buildings you pass is Southport Lord Street Railway Station which opened in 1884 and served the Southport and Cheshire Lines. The station closed in 1952 and is now a hotel. On the opposite side to the shops Lord Street has a mixture of residential and business property and the street is flanked by lines of trees. In 1846 the future Napoleon III lived in lodgings just off Lord Street and it’s said that the covered walkways and tree lined street was the model for the boulevards of Paris when he ordered the reconstruction of the French capital in the late 1850’s through to the mid 1870’s. However… it was morning coffee time.

Sat outside one of the numerous establishments that served morning coffee, it was hard to imagine you’re sat in a tree lined boulevard in Paris… despite the blue skies and sun. Sue’s phone was dinging away with text messages from the hospital. Whenever she’s away it always seems like there is some pending meltdown and the department is going to grind to a halt. Suitably stocked up on caffeine we set off again window shopping and exploring some of the little side malls. 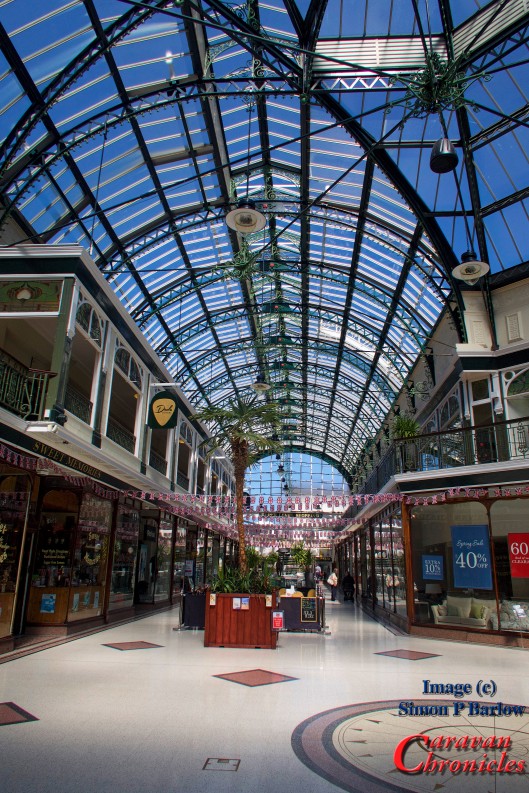 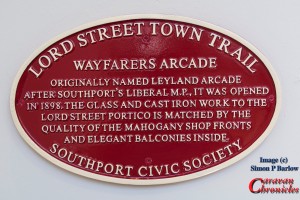 One mall caught my attention. It is the grade II listed building now known as Wayfarers Arcade.

The Arcade first opened in 1898 and the design of the building is typically Victorian, with a domed glass roof, supported by decorative iron work, with some stained glass windows and mahogany shop fronts that have been virtually unaltered since the day the arcade opened. The 13m span, barrel vaulted glazed roof is one of the largest in the UK. 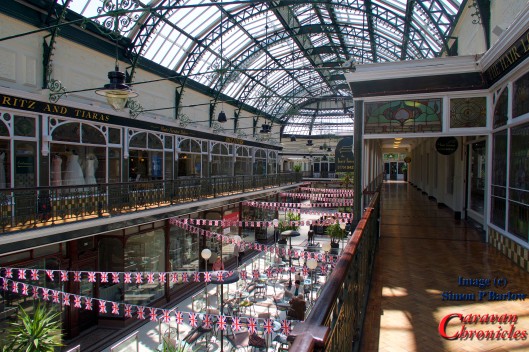 Having ‘done’ Lord Street and the 60’s architecture influenced parallel Chapel Street we walked back towards the seafront thorough King’s Gardens and towards the Pier.

Kings gardens was constructed on land reclaimed along the former sea front as the sea receded almost three miles over the course of several decades and is now popular for all sorts of activities, including sailing. As Sue had never been along the pier we continued throughout the gardens.

The pier is a grade II listed building and at 1112 meters is the second longest pier in the UK (The longest is Southend). In June 2015, the Southport Pier tram service was scrapped due to rising maintenance costs and council cost-cutting measures, but you can still see the old tram lines. It has since been replaced by one of those small land trains that you can see running round the streets of various resorts.

At the end of the pier is the new pavilion opened in 2002 which houses a collection of old penny arcade machines and a cafe… that serves beer. Result!

Sue watching the tide come in… well we think it was coming in, it was so far away!

Looking from the end of the pier towards  the Ribble Estuary and my former workplace BAE Warton. 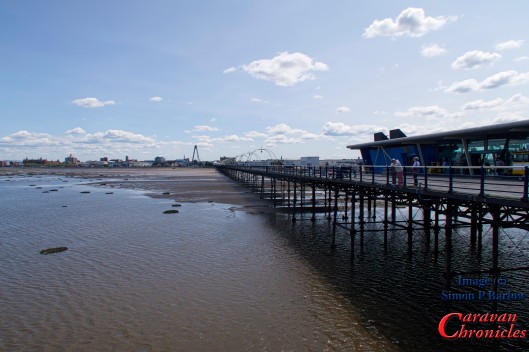 …and just to prove we did walk the 1112 metres to the end, oh yes… the tide was coming in!

It was time to head off to find somewhere for a late lunch again and eventually wander back to the caravan. It had been a great two days beside the sea in Southport. The weather was better than we hoped for and we managed to get some cycling in too.

It’s a busy site… busy in terms of getting a booking as it’s so popular and we can see why. Its hidden away even though its not far from the centre. We could not hear any road noise and sitting outside in the evening was really peaceful. If you want to book the site for some of Southport’s big events like the flower show, air show or jazz festival, (there is lots more, check out what’s on and when here) I guess you have to be quick off the mark at the start of the season. The new section of the site felt open and a little less claustrophobic that the original site and the new facilities block was easily up to standard. The staff were friendly and welcoming. Would we visit again… we only touched the surface of things to do and see in and around Southport, so yes, as soon as we can find a free couple of days when they have spare pitches we will be back.