So you are off caravanning and you are going to stay at a site that does not have mains Electrical Hook Up (EHU) and you need to run a mains powered device…. what options are there? Well you can buy an inverter that converts 12 volts DC (Direct Current) from your leisure battery to 240 volts AC (Alternating Current) , the same as the sockets in your house. But there are some drawbacks, but before we look at that, you need to know a little more about how inverters work.

So how can an inverter create hi-voltage AC from low voltage DC? Ok, lets first look at how you generate electricity. All we need to generate electricity is a coil of wire and a spinning magnet (or a spinning coil of wire and a fixed magnet works just as well) If you look at “Drawing 1” below you can see the schematic of how a rotating magnet induces a current in a coil as the magnetic poles pass the coil. Each time a pole passes the coil a small electric current is produced. As the pole passes and the next pole lines up to pass, the magnetic field is reversed and the current starts to flow in the opposite direction. Rotate the magnet fast enough and an alternating current is produced.

The shape of output of this is called a sine wave. As the magnets north pole approached the coil, the magnetic lines of force passing through the coil are weak and little current 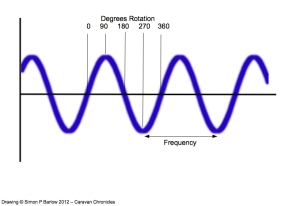 So how can we recreate this? Well, we could use our 12 volts DC to power a small electric motor, which in turn drives a small alternator and generates the 240 volts AC that we need. This would be very inefficient and very heavy and not really practical. What we can do however is simulate the magnets poles passing across the windings of a coil. So how are we going to do that? Well, again, the answer is simple, but first we need to look at another bit of equipment. You will have heard of transformers…. and I don’t mean the popular films about cars that become spooky robots from the cinema either.

Transformers have been used almost since Mr Faraday discovered a few things to do with electricity while he was at the bottom of his garden messing about in his shed. A transformer allows you to increase or decrease an alternating electrical voltage. Some times these are called “Step Up” or “Step Down” transformers depending on if they are increasing the voltage or decreasing the voltage. A transformer is a simple device, it is just two coils of wire interconnected by a soft iron core to conduct the magnetic field. 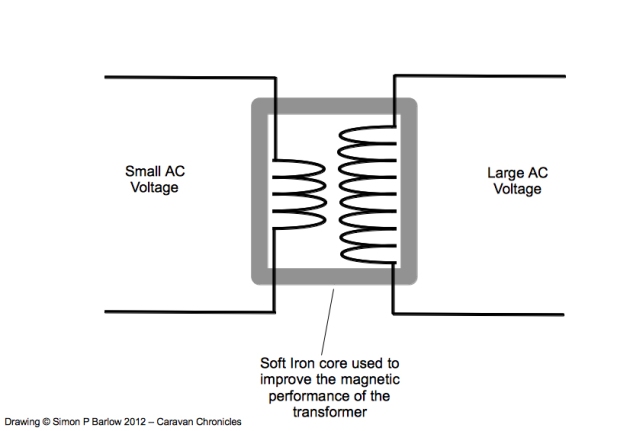 However, like all things electrical, sometimes all is not what is seems. When we “transform” energy, there is a trade-off to keep the whole universe in balance. What? OK, let me explain……

Now lets look at what we want…  to power our kettle we want 3000 Watts at 240 volts so to find the current divide the watts (Power) by the voltage and we get 12.5 amps current. Now lets look at the input, we still need 3000 watts, but this time the voltage is only 120 volts… so 3000 / 120 = 25 Amps. Wow… that’s a lot of current and that means big cables! So you can see, getting a large voltage from a small one using a transformer is easy, but getting the power is a problem.

If you look at Drawing 4, what we are actually doing is switching the battery, first one way across the primary coil of the transformer, then switching it the other way… so in effect alternating which way the current flows through the primary coil. Fantastic… if you can flip that switch 50 times a second, we have this problem licked and will make a fortune! Hang on, there is a problem.. flicking that switch 50 times a second is going to get tiring really quick, there must be another way of doing it? Well your wristwatch probably does it. A simple electronic circuit to flick that “virtual” switch 50 times a second. Great we have it cracked! Hmm… remember a bit back… the universe… balance? Well, lets look at the maths. We still want to boil our 3Kw (3000 watts) kettle and it still works at 240 volts and it still needs 12.5 Amps. This time however, we only have a 12 volt battery to deliver the 3000 watts of power. So, getting the calculator out again 3000 Watts / 12 volts = 250 Amps… That is one big set of cables we need to connect that battery!

90% of inverters on the market are built like this. They are usually built to a price and are usually between 80 and 90% efficient. They usually have built-in some sort of low battery voltage protection and thermal protection. But more usually you will find that they are limited to just a few hundred watts and can only run small electrical devices. There is however another problem. The fact that the battery is just switched one way then another gives a very jagged output and some sensitive electronic equipment can be damaged by this. In order to try to mitigate this, some inverters have what is called a “Modified Sine-wave” output. All these inverters do is step up and down the voltage as it is being switched… so as the switch changes, a voltage is applied, then stepped up a bit, then a bit more, then down again, and down lower than the switch flips over and the cycle is repeated. 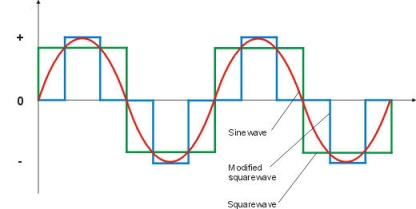 In Drawing 5, you can see the red line is the pure Sine wave, the green line is a square wave which is easy to create electronically and the blue line is a modified square wave to make it more like a sine wave. So what is wrong with this? Well transformers are complicated little things on the quiet… it seems simple at first just to have two coils of wire wrapped round an iron core, but in reality there is more going on with the magnetic side. It takes energy to build a magnetic field, energy is transferred when the magnetic field collapses, then more energy is used to change the polarity of the field and rebuild it. Magnetic fields have their own behavior, and when designing a transformer, you have to also take into account the magnetic performance and what the Hysteresis Loop looks like. A smooth transition rather than an abrupt step is more efficient. All that is getting way to deep for a bit of light reading though!

How can we improve this? Well, we can use a little circuit called an oscillator. You have heard the howl or feedback when someone puts a microphone too close to a loud-speaker… well that is oscillation and we can use a simple circuit to create a sine wave output. Now comes the tricky part… you can’t realistically build an oscillator circuit that could handle the currents involved in an inverter, but you can build amplifiers that can. Think of your local pop concert, the PA system can be rated in Kilowatts! So we can use a power amplifier to give the oscillator enough output to feed a transformer.

If we look at Drawing 6, we can see how these components come together. It looks like now we have the makings of a really good inverter. Add some protection from over-load, a warning system for low battery voltage, a fan to keep the components cool and a beeper to warn if it’s overheating.

Pure Sine Wave inverters are three to four times the cost of modified sine wave inverters. Some of the components used in the amplifier are expensive and the technology used is quite complex. If you are looking to buy an inverter, always try to buy a Pure Sine Wave model, they tend to be more efficient and should not cause any damage to sensitive electronic equipment plugged into them like TV’s and Laptops.

Some equipment will not work on modified sine wave inverters – a lot of microwave cookers don’t work properly.

Just a quick word about efficiency. No inverter is 100% efficient, at best they come close to 92% at worst, they can drop to 50 or 60%.  An inverter needs power to operate, so expect to lose around 10 to 20 watts of power from your batteries just having the thing connected and turned on.  Once it is operating, this well may increase especially if it has to run the internal fan to keep cool. As you go up the price bracket though, some inverters have a “sleep” mode and will reduce their own consumption to a few milliamps until power is required. Any device that has an inductive load, something with a motor, will always be less efficient running through an inverter than plugged straight into the mains electrical supply.. it’s all to do with power factors where the voltage and current become slightly out of phase with each other… but you can forget that… it sounds a bit too much like Star Trek!

In Part 2 I have included a table that will help you choose an inverter and work out the current draw from your battery.

I hope you found the guide useful, keep looking out for some of my other guides here on Caravan Chronicles

If you want to use an inverter using two batteries to provide extended run time, read my  “How To: Connect Two Batteries in Parallel”  as there is a right way and a wrong way.