The rear washroom in our Sterling Celebration 550 has one blown air heating vent, and it does take a while to warm up. Additionally it would be nice to be able to have somewhere to hang towels to dry out. I had been on the lookout for a small electrically heated towel rail for a while. I wanted something that was small, fairly light weight and importantly only a low wattage. I didn’t need to heat the washroom to 90 degrees, just keep it aired. I eventually found a 60 Watt swivel towel warmer from Adige for £49.99 plus VAT. By choosing to keep the wattage low, it was a little more environmentally friendly, hopefully it would keep the washroom aired without the need to keep the heating on and when we are on sites that have a limited EHU supply, we could still use it without tripping the bollard every time we turned something else on as well.

The next thing I needed was a suitable way of switching it on and off with some indication from the caravan when it is on. I looked at the CBE range of fittings, which are standard to Sterling caravans and finding out the price and availability, I soon discounted them. I called im my local B & Q and found a suitable switched fused outlet with a neon indicator in black chrome. I intended mounting the switch on the side of the bed base, just outside the door to the washroom, so it was visible, but unobtrusive. I also wanted to make sure that I was not affecting anything structural in the caravan by installing the switch or towel rail.

The towel rail mounting is via two brackets, that each require two mounting screws. Normally, these would be four wood screws and plugs, but as the wall of the van is only 10mm ply, I wanted something more substantial. I opted to use four M4 pan head bolts and 25mm washers on the back with flat face lock nuts.

Positioning the towel rail so that it could swivel across the door of the shower if more room was needed in front of the sink, I marked the position and drilled the four holes. Remember, a caravan is not always level, so don’t use a spirit level, measure off a point in the caravan. In this case I measured 70mm from the shower door frame to make sure it was square. Before drilling, I removed the headboard from the other side of the wall. It is fixed into position by two long lengths of velcro.

Once the towel rail was fixed into place, I cut off the plug that came pre fitted. I removed the fuse from the plug, to use in the switched fused outlet as I assumed it would be 3 Amps. It was however a 13 Amp fuse. A 13 Amp fuse should not have been supplied with the towel rail, it’s only 60 Watts so a 3 Amp fuse would have been sufficient.

To feed the cable under the bed, a small hole was drilled just below the cable exit point from the towel rail. In order for it to swing, a sufficient loop was left in the cable so it would not strain when moved.

Now we have the cable from the towel rail under the bed, we can look at installing the switched fused outlet. The unit I had bought was a flush fit faceplate, the idea being it would be as unobtrusive as possible. In order to keep it flat to the surface it was being mounted on, I elected to mount the back box behind the wood panel, rather than through the panel. This required some precise cutting using a hole saw and a sharp craft knife to gently shave the sides until a perfect fit was achieved.

Inside the bed box – the backing box and cables

The front faceplate and rear mounting box were then offered up and held in place by the normal two face plate fitting screws. You will probably need to get slightly longer screws than are supplied with the faceplate.

The cable was routed around the inside of the under bed storage area and held in place with sticky cable pads and zip ties. Once round the under bed storage area, I routed the cable up through the back of the TV unit and up to an existing 13A socket. In the Sterling, this socket and the one inside the drop down TV fitting are supplied on their own Circuit Breaker, so adding an additional spur to the switch fuse outlet is OK. The additional load is only going to be 60 Watts or 0.25 Amps.

Once I had the cable fed up through the under bed storage area, I could remove the exiting 13 amp socket in order to add the new 2.5mm feed cable.

Removing a CBE type socket is quite simple. There are small slots in the top and bottom of the face plate that you insert a small screwdriver and gently pop off the trim piece, behind that, there are two small screws holding the mounting frame to the surface. Simply unscrew these and the whole thing will come away, exposing the protective back box. As there were already two 2.5mm cables going into the socket, I thought this was going to be a bit of a squeeze to get a third one in. In fact, it was quite easy as the terminals could accommodate the three cables easily without any problems.

Once the cables were secure, before I reassembled everything I checked all the connections with a digital meter and also checked the earth impedance from the metal frame of the towel rail back to the main 240 volt chassis earth. All the readings were OK. When the caravan is hooked up to 240 volts I’ll do another check on the Circuit Breaker too.

So, that’s it, around two hours work including coffee and a bacon & egg sandwich fetched from the local cafe by Sue we now have an electric towel rail.

The project cost £77.37 for the towel rail and all the bits and pieces. I’m sure it could be done for a little less as there are cheaper towel rails and face plates.

I’ll leave you with a few more photos of the project. Hopefully it has inspired you to go and install your own heated towel rail.

The only thing left to do now is vacuum up all the debris! 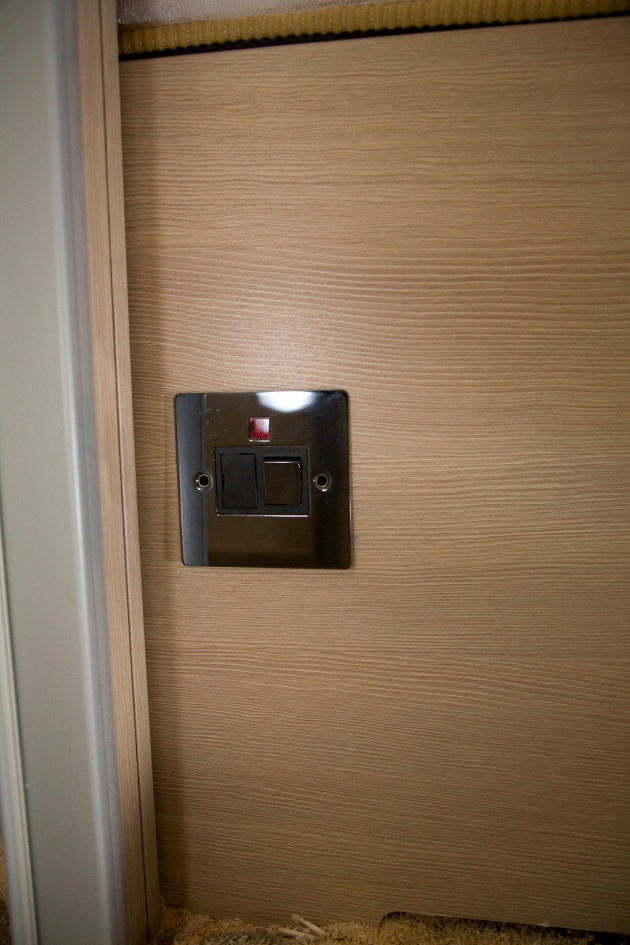 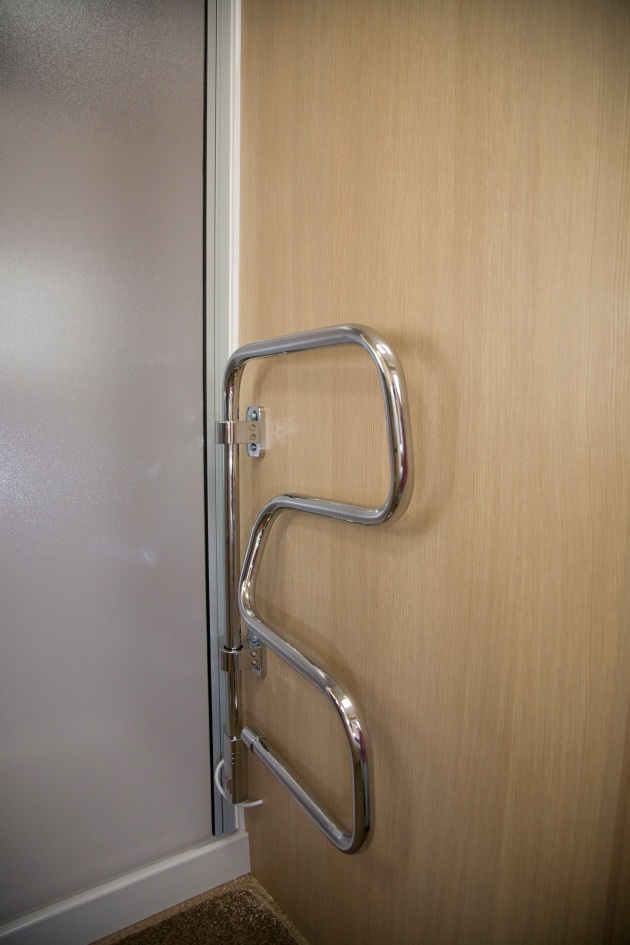