One of the places we had on out list of “must visit” was Bletchley Park, home of the wartime code breakers. The other was more of a re-visit as the last time we were both in Cambridge was the day before I set off on my round the world flight.

We had loaded up the caravan and by the time we pulled out of the storage compound it was dead on 8:20. The traffic was not too bad considering it was a Friday morning and the M60 was flowing quite well, as was the M56, and even the A556 Chester Road short cut to the M6 was quiet. It was so quiet that the on ramp to the M6 didn’t even have the traffic control lights operating. We were heading down to the Caravan Club’s  Ashridge Farm  site near Letchworth just off the A1(M).

The M6 was so quiet that by 10:40 we were parked up in one of the caravan bays at Norton Caines services on the M6 Toll road for a leg stretch and ‘facilities’ break, which also found me wandering round WH Smith looking at the maps. The road atlas Sue was using was dated 2003 and originally cost £10.99 so I guess at a yearly rate of just over a pound after 10 years we had got our monies worth out of it. We now have a shiny new 2013 edition which means we now have even more roads to get lost on! If you use the M6 Toll road don’t forget to present your Caravan Club membership card. It saved us £4.50 – in effect the caravan goes for free!

The rest of the journey down the M6 and M1 was as quiet as our morning start and by 1:20 we were pulling in to Ashridge Farm. Do follow the route shown in the handbook (via J9 on the A1M and the A505) as the roads through some of the small villages are not suitable for towing caravans or large motorhomes.

The site has 40 pitches – 20 hard standing – and is set in rural Hertfordshire on the border with Cambridgeshire.

Water water every where…… and it shouldn’t be!

We settled on Pitch 1 and levelled up, plugged in and filled up. That’s when the problem occurred  We had drained down the system as we always do and after our last outing when we had a problem with the pressure switch (read “A Couple of Updates and a Problem“) I had adjusted the pressure switch on the Flojet pump from instructions given on Swift Talk, to hopefully cure the problem. I turned the pump on and let the pressure build. The pump clicked off and I opened the tap on the sink in the kitchen to bleed off the trapped air… first the cold, then the hot. Water flowed thorough OK and I closed the tap. Sue who was outside said she could see water running… and it was coming from the wheel arch! I’d closed the drain valve… Hmm.. Bugger I though’t I must have turned the pressure screw on the Flojet pump too far and the higher pressure had blown off one of the pipes. Hang on, the pump wasn’t running though. I remembered reading in the forums a number of postings about the sink drain pipe falling off.  Opening the small cupboard door under the sink I could see water dripping down from the sink pipe. 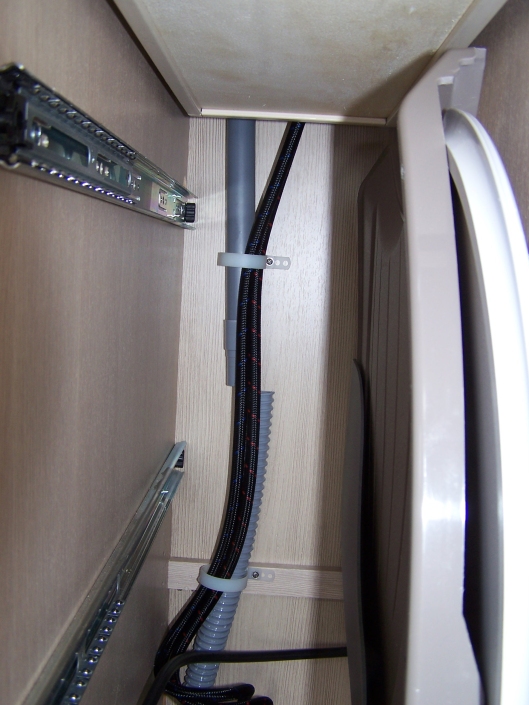 Bad design? Shoddy Workmanship? All I know it was bloody annoying!

Oh come on…. which numpty at Swift thought that a flexible pipe could simply be pushed on to a ridged pipe in a vertical orientation without mechanical fastening, just relying on friction to hold it in place. Especially when hot water would expand the plastics so causing movement in the joint which would lead to failure at some point.

After much “harumphing” a quick fix was done with a couple of zip ties round the flexible pipe and another couple of long zip ties up to the pipe retaining ring above to stop it slipping down.

If you look at the picture on the left (click on it to make it full size) it would have been so much smarter to take the ridged pipe to the floor and put an elbow on it then transition to flexible pipe or even let it continue straight down and pass through the floor then connect it to the flexible pipe.

We are just glad that it was clean water from bleeding the air out of the system and not a bowl full of dirty washing up water that flooded out. I already have a permanent fix in mind so will probably do a follow up posting sometime soon. We left the bottom out of the cupboard after moping up as much as we could to let everything dry out. I guess we will leave it like that for a couple of weeks and keep checking it for any signs of water damage. I think that it may have only been a couple of litres of water in total thankfully.

Sue catching up on the caravan magazines…

The sun was shining as the clouds started to clear as we sat outside and had a small beverage well it was 5 O’Clock somewhere!

The rest of the afternoon was spent catching up on reading the latest caravan magazines and I’d saved the latest copy of Land Rover Owner. Reading was only interrupted to watch several light aircraft from nearby Old Warden pass overhead… and one aircraft out to the east of us who obviously had a student at the controls as I guess he was up to Exercise 9 and/or 15 – turns, turning on to a heading and steep turns with his/her instructor.

We were up fairly early so we could have a full day at Bletchley Park. The sat nav suitably programmed with our destination informed us it was about 36 miles and would take just under an hour. The sun was shining again and not a cloud in the sky as we left.

Bletchley Park and the work it did during WW2 was probably one of the most closely guarded secrets of the Second World War. Any intel that came from there Churchill had it classified as “Ultra” which was higher than “Top Secret”… it was “Ultra Secret”

Considering over 10,000 people worked there at the height of the war, it is amazing that it remained secret for over 30 years until the mid 70’s and even now much of what went on is still not talked about. Two of the most well known things about Bletchley Park are mathematician Alan Turing’s work on breaking the German Enigma Code based on work by the Polish in the early 30’s and as the birthplace of the modern computer. 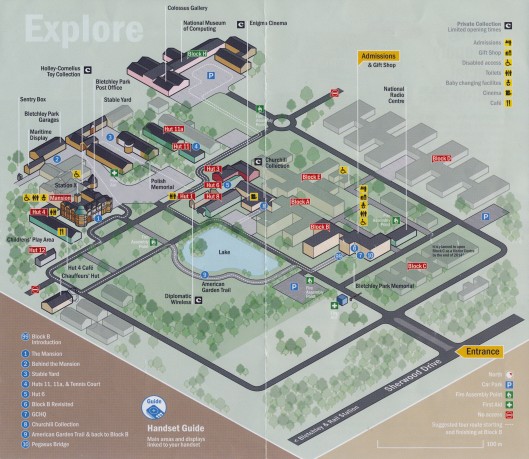 There is lots to see so we had allowed a full day to visit. The admission charges can be found here and as it’s a registered trust you can ‘gift aid’ your admission fee which helps them raise funds.

Wandering round the exhibits and reading about some of the people that worked there makes you think about what they actually achieved. You discover the complexity of the Enigma machine…. then it makes you wonder that having never even seen one before, how they could ‘reverse engineer’ one so that they had a flow chart and wiring diagram of how it worked and armed with that, they could then set about designing a machine to decode messages encrypted on it.

Bletchly Park in the April sunshine, and no, it’s not photoshopped. It really was that nice!

Just to the side of the main house is “Hut 4” which is now a cafe and after purchasing two coffee’s and two panini’s, which were actually reasonably priced, we went and sat outside in the sunshine. As we sat there I wondered how many others had done so under the same sun so many years ago, then returning to their hut after lunch went on to solve puzzles which ultimately would save lives.

After lunch we went round the main house and stopped by Hut 1 – Diplomatic Wireless… which was crammed full of radio equipment… by the time I’d worked my way round the hut and spent some time talking to the chap looking after the displays, Sue had given up on me and found a bench outside in the sun.

We next headed over to The National Museum of Computing which is home to “Colossus” the machine designed by Tommy Flowers to decrypt the Enigma codes and is considered the first true modern computing machine. There was an excellent talk given by one of the staff about it’s development and how it ran.

Moving through the rest of the museum was stepping back to my student days…. ferrite core memories which I learnt to repair, removable multi platter storage drives, there was even my old Texas Instruments programmable calculator complete with magnetic cards and wallet on display. I didn’t see an ICL9000 though… if I had done I think I would have kicked it… I could never get the hang of writing good code for the mainframe. An old CATIA 3D CAD workstation brought back memories of working at British Aerospace along with banks of PDP80 processing units. I could have stayed in there all day. We stopped by the small shop and bought a couple of bottles of water and sat outside.  Seeing all that old computing equipment… a lot of which I trained on or worked on in the early 80’s made me feel old… Christ, I was in danger of becoming a museum exhibit myself… “And here we have an example of an early Computer Hardware Engineer – completely obsolescent on completion of training.”

We headed back to Ashridge Farm, just in time for pre dinner drinks and to watch more light aircraft drawing patterns in the still cloudless blue sky.

Bletchley Park and The National Museum of Computing are well worth a visit, and plan to spend a good portion of the day there. They are open most of the year and are great for children with enquiring minds.

A thoroughly good read is “ENIGMA The Battle For The Code” by Hugh Sebag-Montefiore (ISBN 0-75381-130-8) Which tells the story of the caputre of an Enigma machine and codebooks from a German U-Boat. I read it a few years ago, but it’s back on my list of books to re-read.

A few snaps of Colossus… 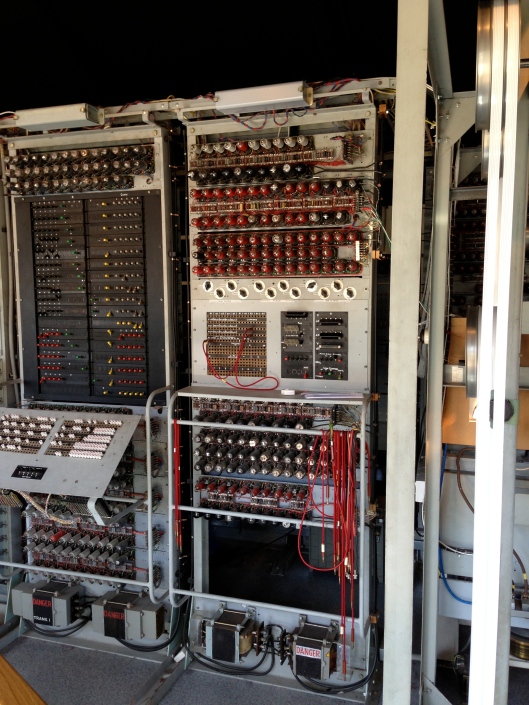 3 thoughts on “Code Breaking and Cambridge…Pt 1”