When we were at Lincoln in December, we had to de-scale the small electric kettle we have in the caravan. Having to de-scale things is something that for people living in the North West of England don’t normally have to do as our water here is very soft. However trips in the van to hard water areas, especially when we were in France meant we had the dreaded lime scale buildup. We managed to do the kettle while in Lincoln using some white wine vinegar we had, however, that gave us an indication that we would need to tackle possible lime scale buildup in the caravan’s water heater  which would affect the efficiency of the heater and eventually lead to its premature failure. Prevention is always better than cure! 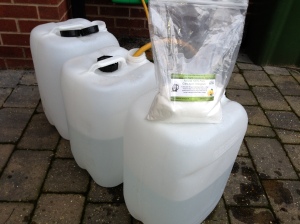 So today was an acid trip… of sorts. I’d ordered 2Kg of citric acid over the internet from Meridianstar which arrived this morning. So we filled up three 25 litre containers of fresh water, loaded them into the Freelander and went off down to where we store the caravan. I mixed 1Kg of citric acid with 20 litres of water to give us a 5% solution.

We connected up the container to the caravan water inlet, shut the drain down valve and pumped the solution into the water system. We would need to leave this solution for about an hour, but to help speed it up we turned the water heater on. After 15 minutes I ran some water through all the taps into a jug and poured this back into the water container outside. We repeated this every ten minutes to ensure that all the solution had been pumped through all the pipes. After an hour, we turned the heater off and kept running the solution through another three of four times. It was now time to flush the system through by turning on the taps and letting it run through the sink drains to outside. When the container of solution was empty we replaced it with one of the 25 litre containers containing fresh water and pumped that through for a short while, letting it sit in all the pipes for 30 minutes. We continued pumping the fresh water through the system until the first container was empty. I connected up the next container and we repeated the process until another 25 litres had flushed through. As all the piping is PVC we were only really concerned about flushing through the hot water side and particularly the water heater. 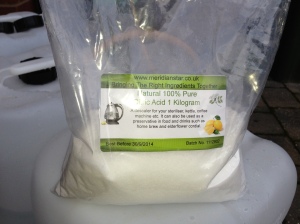 Once all the fresh water had been pumped through, tasting the water told us it was fresh with no hint of citric acid. We then opened the drain taps to drain the system down. So now, hopefully the inside of the water heater is as clean and shiny as the kettle.

The guys at Meridianstar supply food grade citric acid in various sizes. We bought two 1Kg bags, so we have 1Kg spare for next time. Citric acid can be used to de-scale other food equipment… baby steralisers  etc. so we don’t have any worries about after taste or introducing chemicals into our water system. They were also pretty quick in delivering too, it arrived 48 hours after ordering.