We rattled our way into Terrasson, which was shut on a Sunday. Even without the weight of the caravan in tow I could tell the Freelander was down on power and pulling away from stationary it was a challenge not to stall the engine. Luckily the local Intermarche supermarket had a couple of unattended self service fuel pumps so I could at least top up with hopefully some different fuel. Filling the tank to the brim again took 24.12 litres and the mileage now read 62445, so we had done 257 miles since the last fill up and now averaged 25.6 MPG. We pulled out of the Intermarche filling station and stopped a few hundred meters later outside a bank…. time to top up the Euro’s. I had a sneaking feeling that we may need quite a few if the Freelander ended up in a garage.

However, pulling away from the bank, the Freelander was feeling much better, not fully fit, but off the critical list. I had now convinced myself that on the balance of probability and with what Chris had said, it was down to the fuel. We drove back to La Tournerie in a slightly less rattley Freelander.

Err….. where did everything go?

Today was our first venture ‘soft road’. Phillip had briefed everyone to be ready to go at 11:30. We woke up around 7:30 and peered out of the windows…. where did everything go?. We were enveloped in cloud. As most of the Dordogne is on the edge of the ‘central massif’ we were at around 2000 feet above sea level, so basically we were sat in a cloud. Not knowing the local weather systems I didn’t know if this would clear in an hour or sit there all day. However, as there was a three or four knot breeze, at least it should blow through, and within twenty minutes it had started to thin out.

More caravans appear out of the clouds!

By 9:30 it was thin enough to see the outlines of clouds above so it would not be too long before it had gone completely. At the appointed hour people started appearing and the 4 x 4’s lined up at the gate with Philips blue Defender at the front. I had been undecided if it was a good idea to go on the off road trip with the Freelander engine not being performing 100 percent, but after adding the fuel yesterday and seeing the difference, I thought at least using more fuel and topping up again would at least dilute the ‘iffy’ fuel already in the tank. Anyway, there were enough 4 x 4’s there to be able to recover me out of almost any situation and I’d got my bag of off roading stuff in the back – collapsible solid tow link, recovery ropes, strops, shackles, hand winch, kinetic recovery rope and a couple of ground anchors.

Phillip gave us a briefing on the type of roads we would be travelling on and their history. France is criss-crossed by small tracks used by the “chasse” (the hunt). Each weekend, groups of locals head out into the countryside using these tracks. They park up and disappear into the woods armed with rifles to basically shoot anything that actually moves…. from wild boar to sparrows…. and including each other sometimes. Thankfully Monday was not a hunting day for the locals. Apparently there are tens of thousands of kilometers of these roads all over France. Considering how few ‘green lanes’ we have in the UK and how busy some of them can be, especially over bank holiday weekends, I am surprised there isn’t an invasion of UK 4×4’s trying out these roads.

Our first stop…. to admire the view across the valley to La Tournerie…. honest it’s there!

When off roading don’t get too close to the vehicle in front just in case they have a problem, you want to be able to keep winching distance away just in case. 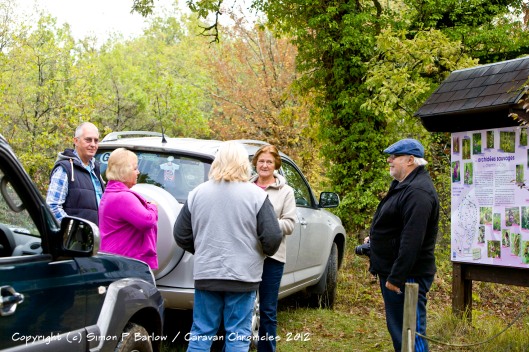 Wendy provided a splendid buffet lunch, including rather nice local wine – for the non drivers of course! The sun finally broke through and the sky cleared as well. 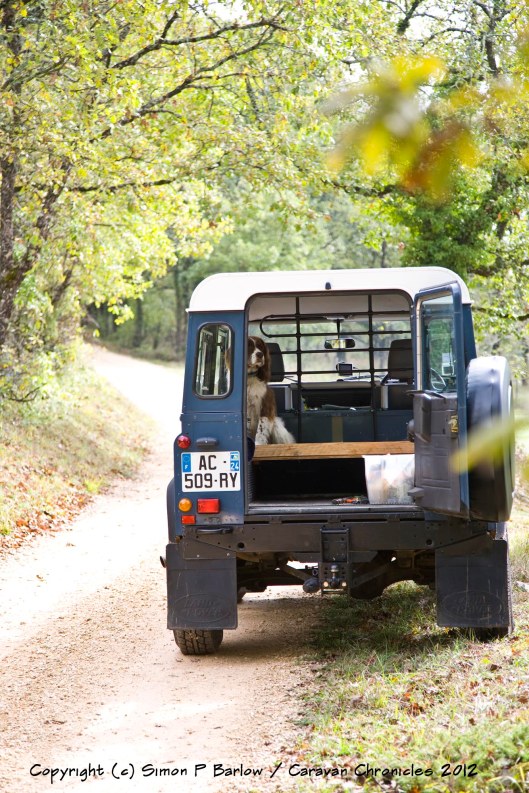 The buffet clean up department wait patiently in the back of Phillip’s Defender until called on for food disposal duty.

Back on the trail. Despite it being October, autumn had not yet reached this far south.

The trails were easy and ideal for first time off roading. It allows anyone to explore the hidden world off the beaten track.

Beside the river in Montignac

All to soon we found ourselves back at La Tournerie. The trails had been mainly dry and fairly easy to negotiate, ideal for ‘soft roading’. I still wanted to see if I could get some diesel additive, so we set off to go into Montignac for a wander round. The Freelander had spent the last three or so hours on tick-over in first or second gear and had performed admirably and I hadn’t really noticed any problems. The rattle was still there on tick-over though and the low end power seemed lacking. We parked up close to the river and walked through some of the back streets following the riverbank towards the old bridge. 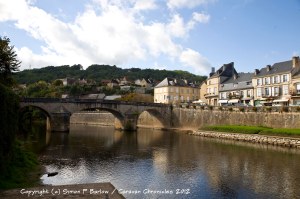 The sun was shining, and even for October it was quite warm. Wandering past some of the old streets it always fascinates me that places always seem deserted with shutters over windows and no signs of life in a lot of buildings except for the occasional cat sat sunning itself on a balcony looking down on us feigning disinterest but watching our every move.

Crossing the old bridge we found a small ‘Tabac’ and “Presse’ and Sue managed to get an English newspaper and I bought some cigars which was strange really as I’d stopped smoking cigars quite a while ago. I guess my stress levels over the Freelander kicked in. We walked along one of the streets until it opened out into a small square surrounded by cafes. Apart from a young couple sat at a table outside one cafe both smoking cigarettes and hanging on the last drops of coffee in tiny cups, and an old gentleman sat outside a doorway of what seemed to be an private house, the square was deserted. We followed the edge of square and stopped to admire some of the wares on display in the patisserie window. A small alley led us back to the river and we walked back towards the old bridge.

Crossing the bridge again and heading in the general direction of the car park we passed a few more shops and what I think was the town hall. As we had not planned anything for an evening meal, and the weather was so nice, it looked like there might be a chance of deploying the Cadac.  We wandered back to the car and set off for the local Intermarche for supplies.

While Sue wandered off checking out the price of wine and varieties on offer in the extensive wine section, I was drawn to the tool and hardware section of the local Intermarche supermarket. I wandered past shelves of tools and hardware – thinking some would make welcome additions to my workshop, when I came across the car spares section and looking through all the oils on display there was a shelf that was full of a range of diesel and petrol additives. Donning the reading glasses in a vain hope it would help me to decipher the French instructions on one of the bottles I admitted defeat…. and headed off to find Sue who had the French dictionary in her handbag. After much page turning and some speculation on the deciphering of the instructions, including swopping of reading glasses as Sue had left hers back in the caravan, two bottles of Diesel additive were dropped into the trolley…. along with two or three bottles of wine and a 3 litre box of sauvignon blanc we then headed off to the food section.

Long shadows cast by the setting sun, but still warm enough for some to sit out while Sue tests the wine!

I had added some of the diesel additive to the Freelander. It made a big improvement almost immediately. At least I was now almost certain that it was not an issue with the engine but fuel related. On tick-over the engine sounded almost normal and the low down pulling power had returned. I did start thinking as there was a shelf full of different additives in the local supermarket, was this a known issue by the French and they just solved the problem by adding stuff to their tanks?

We ended up not deploying the Cadac as we had found a fine selection of local cheeses, meats, garlic olives and good artisan bread…. and a couple of bottles of nice wine to accompany it with. Oh yes…. Sue had some salad as well.

The end to a very pleasant day

Next time……. We get wet in Sarlat and go shopping again!

2 thoughts on “The French Connection – Pt 3”