We have just got back from a three day break at the Caravan Club’s site in Bridlington, which, unusually for us was blessed with the warmest March weather for decades. Now Bridlington is not somewhere that would have sprung to mind for a destination, but there was an ulterior motive… we had been invited on a tour of the Swift Factory. The caravan had been given a bit of spit and polish the previous weekend so was looking like it had just arrived from the factory… apart from one thing, the Swift logo had fallen off the wheel centre on one side. Luckily I spotted it as I was removing the Al-Ko wheel lock before setting off so have put it in my caravan tool box to give it a course of looking at when we get back.

The big innovation for this trips was boxes. While wandering round Office Depot I spotted some stackable boxes by Really Useful Box from the Really Useful Product Co… and I thought they look really useful! In fact as I had some vouchers from collected points, I decided to buy some of the 9 litre boxes. One of the things that didn’t work for me in the caravan was the storage of some items, some of the domestic cleaning products residing in a top locker wasn’t right. Now they are organised in a box that fits under the near side front seat. Three of the 9 litre boxes slide nicely under there and provide secure storage that is easy to pull out and retrieve items stored rather than having to grovel round under the seat trying to find something that has slid to the farthest corner.

All this organisation got me thinking… and a second trip to Office Depot armed with the box selection guide from the web site had me returning with more boxes. Now Sue has a box in the Garage that has the basics… tins of tuna, packets of rice etc etc… i effect a larder box with all the heavy stuff that you only need to access infrequently. Sue now has a list of whats in the box, when we set off on a trip, it is stacked in the back of the Landrover with some of the other boxes and when we arrive on site and take the aquarol and wastehog from under the bed, it is a simple matter to slide these boxes underneath in their place via the outside locker hatch. When we are packing up to come home, they are simply stacked back in the Landrover and transferred to the garage when we arrive home. Sue has chance then to check whats been used and replace the used items. It’s worked really well for us and it means I can keep a check on the weight loaded into the caravan.   I’m now looking of one that fits into the base of the wardrobe to use as a laundry box.

The tow on Tuesday to Bridlington over the Pennines via the M62 was quite a nice trip of 128 miles. The traffic was light and there were few other caravans or motorhomes spotted. I’d already looked on Google maps satellite view for the Caravan Club’s site and discovered it wasn’t there so transferred over to Bing maps and used their satellite view instead to check out the entrance to the site. As Bridlington was less than 12 months old, there didn’t seem any problems, so I created my own POI file for the site and loaded it into the GPS. We have never been over to East Yorkshire before, and I guess did not really know what to expect, but we were both blown away by the beautiful landscapes we passed through.

Pitched in the March sun

Arriving at the site around three hours after we set off found us parked behind someone checking in…. after a wait for the other person to get themselves organised and actually get themselves through the barrier we were finally checked in and waved through. It’s become a well honed routine now setting up and within 30 minutes, Sue was sat out with a glass of wine and I had a beer in one hand, camera in the other.

The following day, the sky was still clear. It had been cold overnight, enough to leave

heavy condensation on the car and van, but the sun was soon making short work of that. We decided to go into Bridlington for a walk round and to walk along the front. Parking in the harbour car park we walked along the promenade until we ran out of Bridlington basically so we turned inland and headed back down the main street looking for somewhere to sit in the sun and have a coffee. After walking the length of the main street and not finding much in the way of a simple coffee shop, we headed back onto the promenade and backtracked

The sea was almost as still as a mill pond

where we had walked earlier as we remembered we had passed a couple of likely looking places before that were not quite open. I think the fine March weather had caught out a lot of the cafe owners and they were all scrambling to get the tables and chairs set up out side.

We found a table and sat down, Sue went inside to order and I checked a tourist map for the area that we had picked up in the information centre at the camp site.

One of my passions is to find old style sweet shops that sell traditional sweets in jars. If you have read any of my previous posts, I think you will have picked up on this and noted I’ve managed to find one almost everywhere we have been. While we were waiting for the coffee’s to arrive, I managed to search google on my iPhone and find the address of one about ten minutes walk away. I could stock up on Coltsfoot rock and cough candy ans Sue could lay in a supply of her favourite wine gums.

After we finished coffee we set off with map in hand to find the sweetshop. Unfortunately when we arrived, it was now a purveyor of all things healthy…. namely vegetables. Aww come on from a sweet shop to selling vegetables – give me a break it could have at least been a pie shop!

Feeling rather down as I’d no coltsfoot rock or cough candy we wandered round the streets. We always try to find local shops for providing food for our trips and we stopped by a couple of butchers shops to see what they had to offer, we decided that on the way back to the campsite we would call in to Marton Manor Farm Shop to stock up. Wandering back to the car Sue spotted it…. Memory Lane Sweet Shop! 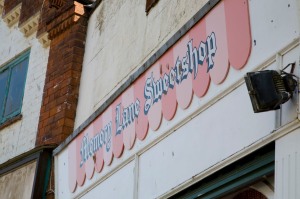 Woo Hoo! I could indulge and stock up. Wandering in the shop was full of all the smells and jars of sweets I remember from my childhood. The jars seemed smaller, but I guess that is because I was smaller back then! Sue spotted the coltsfoot rock first and then the cough candy. So another old fashioned sweet shop to add to my list… Memory Lane Sweet Shop, 2 Marshall Avenue, Town Centre, Bridlington, YO15 2DS. Talking to the owner, they were hoping to refurbish the shop front in the near future, so it might not look quite like the one on the web site. So if you like old fashioned sweets – they have a stock of palmaviolets and imps (remember them!) too, please call in and tell them I sent you!

We wandered back to the car with our big bag of sweets and decided to call in to the farm shop on the way to Flamborough Head.

Marton Manor Farm Shop is only a mile from the entrance to the camp site and if you are visiting Bridlington it is well worth paying a visit, even if its only for an afternoon tea. We stocked up the larder including fresh eggs and home reared pork and bought two large rather fine looking gammon steaks. As we had filled the cool box in the back of the Landrover, we decided to call in the campsite and drop off the food so we could put it in the fridge.

We stuffed everything into the fridge and realised our over enthusiasm had got the better of us… we were not prepared to cook anything the size of these gammon steaks. Hmm… dilemma. We could only do one at a time under the grill, we didn’t have anything big enough with us to put on the gas burner… Sue said “Pity we don’t have a Cadac yet” A Cadac was on the shopping list for purchasing later this year. “There must be a shop round here that sells Cadac’s” I helpfully replied. Google is a wonderful thing! Within a couple of minutes I got the address of Yorkshire Coast Caravans on the outskirts of Bridlington and according to their website they have a well stocked accessory shop and sell Cadac’s! Well to cut a long story short… one Cadac, 3 metres of gas hose and two jubilee clips later, we were cooking on gas! 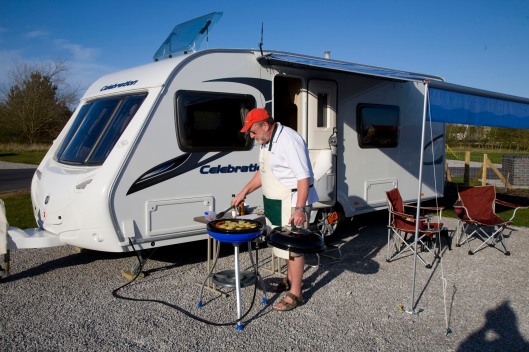 Forget “Two Hairy Bikers”… what about “One Hairy Caravanner”!

I must admit, there is nothing like a bit of outdoor cooking… but who would have guessed that in March, on the East Coast you would have a wonderful evening’s sun to cook under. So, gammon with mushrooms, pan fried potatoes with choritzo and topped off with a fresh free range egg washed down with a bottle of beer went down a treat.

Next time… I’ll tell you about our visit to the Swift Factory.

I’ll leave you with a few pictures of the Cadac Miester taken by Sue…. 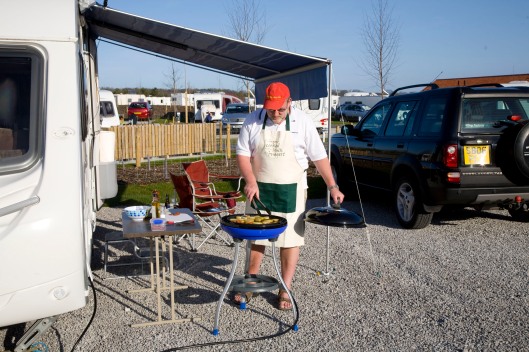 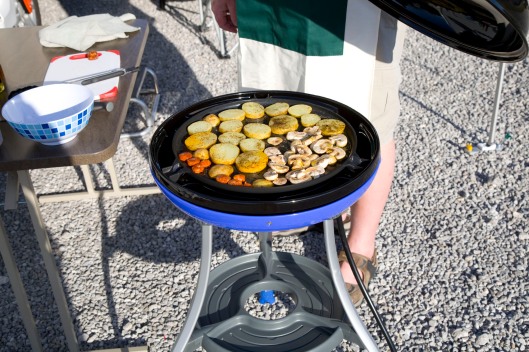