Our first attempt at packing the caravan up went rather well… we were up early, I’d cooked breakfast again and we had washed up and stowed everything away. During the course of breakfast we had reflected on the first two nights… and what had been a firm decision on the type of caravan we wanted had to be revisited. We definitely wanted a full rear washroom and we definitely wanted a fixed bed! There was a turn about, after looking at fixed beds back at Glossop Caravans a few weeks ago and deciding they were not for us… we had decided a fixed bed was the way forward. We had also revised our list of things we thought we wanted… but this was very flexible at the moment.

It only took us 20 minutes to pack everything away and hitch up… which was surprising, I’d read stories of people spending all morning packing up and hitching up. I had the feeling we were not getting this right somehow. We finally drove round the access road to Kelvedon Hatch at just before 10:30 in the morning and set off for Canterbury.

Joining the M25, the traffic was light, even for a Sunday morning. The weather had cleared overnight and we saw blue skies for the first time since setting off. The wind was light, which was a good thing… we had only ever been across the Queen Elizabeth bridge once before and that was years ago not long after it first opened. Towing a caravan was a different ball game and thankfully passed without a single twitch from the box on wheels behind us. We arrived in Canterbury a lot sooner than we had planned, however we headed straight for the site, I knew that sometimes they would make you wait if you arrived before 12:00, but decided that as newcomers to this world, we might be able to get away with it.

Thankfully, there were no problems and on checking in at reception, we were given the biggest welcoming pack we have received to date anywhere. It had absolutely everything in it for local take aways that would deliver to your pitch number to city 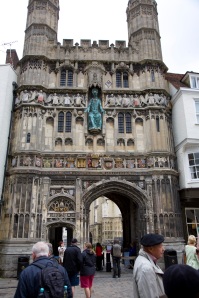 The gateway into Canterbury Cathedral

maps and cycle routes. I gave the staff there my new C & CC membership number and we were  booked in. A friendly gentleman on a bike showed us to a choice of pitches and within 30 minutes, we were pitched, sat outside on the chairs with a glass of wine and a bottle of beer. We had to be missing something…. everyone seems to take so long setting up, we were doing something wrong but we didn’t know what.

Canterbury is a wonderful place and if you haven’t been, it is well worth spending a couple of days wandering round. There are a couple of large car parks that are within 2 or 3 minutes walk of the town centre and there is an excellent bike parking facility next to the bus station. One thing about the C &CC site at Canterbury is it caters for people using the ferry at Dover… so for us it was fascinating to see a sudden rush of German, Dutch and Belgian caravans and motor homes arrive. We decided, it was good fun watching other people pitch… we would have to do more of it!

That night we rang Pete and Julie (read part 1 of the Hello World! to find out who they

are) We had arranged to meet them at the Oxford C & CC site and they were on their way down from North Yorkshire… via Melton Mowbury where they were stopping the night at a Caravan Club site before travelling on to Oxford. We had originally arranged to meet up with them so that if we had any problems or questions they could help up out, but by now independently of each other, we had come to the conclusion that we liked caravanning. We seemed to be able to cook in the van without any problems, the domestic chores were shared out… except for emptying the Thetford Cassette… which seems to be a man thing. Sue had come with me on one visit to the elsan point just out of curiosity I think… unless she thought I’d get it wrong and end up covered in it!

Two nights at Canterbury sped by…. and we found ourselves packing up again ready to head off to Oxford. 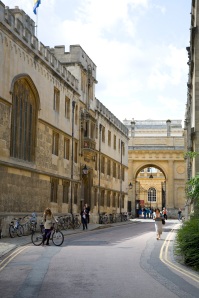 It was a Tuesday and the traffic was a lot heavier, however we found ourselves arriving at Oxford in good time without any delays anywhere, even after I miss understood one of the sat nav instructions and took us on a slightly extended route to the M25, but that’s all part of the fun of it… well that’s what I said to Sue anyway!

I’d already checked on Google Maps using Street View to check on the final couple of miles to each of the caravan sites, and I’d printed out a map for each of them as well, so I knew that the entrance to the Oxford site was down the side of the Go Outdoors store, which is kind of handy really. We were pitched and set up with our chairs and drinks within 30 minutes of arriving…. just in time to watch Pete and Julie arrive with their outfit. Now to anyone that knows Pete and Julie, they will know that Pete & Julie don’t just arrive anywhere…. they have had to overcome some disaster, crisis, global meltdown… something, they are just those kind of people. This arrival was no different.  However, the sun was shining, the beer and 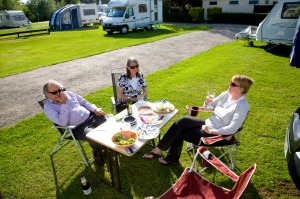 wine had been chilled and we sat out in the sun catching up. Later we caught the bus into Oxford and found a nice Italian restaurant.

The following day we took the bus in to Oxford again and spent the day sight-seeing, taking the open top bus tour and wandering round some of the colleges. The weather was overcast in the morning, but gradually improved as the day progressed.

All to soon our time in Oxford came to an end. Pete & Julie decided to stay on another day before returning home, unfortunately, we had to get the caravan back to North Western Caravans. The trip home on Thursday was uneventful and we arrived home a couple of hours after leaving Oxford.

It seemed strange towing the empty van back to the hire company. It had been our home for only a few days, but we got to like it, even though it was nothing like we one we actually wanted. We drove into the yard and unhooked the caravan and said goodbye, it had started out being a bit of a nightmare…. but in 6 days we were converted….

One night, we had sat in the caravan and complied a list of 60 things we wanted in a caravan, then next thing was to find a caravan that ticked off all 60 items. We were going to be caravanners!